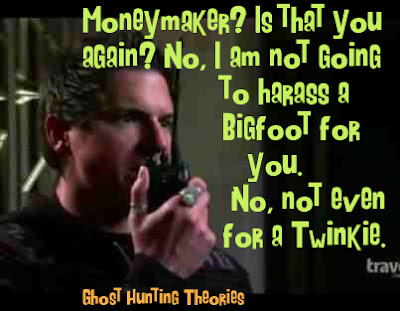 "Dumpster-diving squatches are well known." (Bobo)
"Smells like a cow's butt everywhere you go." (Bobo)
"It's always cool whenever you see something big and glowing." (Bobo)
"The refrigerator in this area is full and it's just waiting for someone to come and take it out." (Cliff)
"Taking Bobo into a DNA lab is like taking a bull into a china shop" (Matt)


Unusual terrain in Oklahoma, on flat farmland area.  Interesting tracks following a fence line with very wide strides was a start, but a big hunk of hair the researcher gave them was promising. It came off a branch 8-9 feet off the ground.

They went out at night to see if they could find anything. They found potential food sources, but nothing too exciting. They did, however, drop off the hair for DNA. Bobo causes test tubes to crash.

This was probably one of my favorite town halls they ever had. The witnesses were ideal and what they were saying soooo jived with BF in agricultural areas and waterways. I was very impressed.

Ranae camped out alone.  The river they followed not far from downtown Oklahoma City.  It was dense and nasty and untouched along the river and the witness was very credible in his storytelling.

DNA results came next. Doesn't appear to be human. Does not appear as if it had been cut hair, had worn tips.  They isolated DNA, but it was degraded from exposure.

The travel corridor was the North Canadian River to avoid farms and open areas. They decided to go down the river, lights out at night.

They concluded that the animals were too comfy and loud for having a Squatch there.

Okay, no real exciting encounters, but some of the best witness stories I've heard in quite some time.