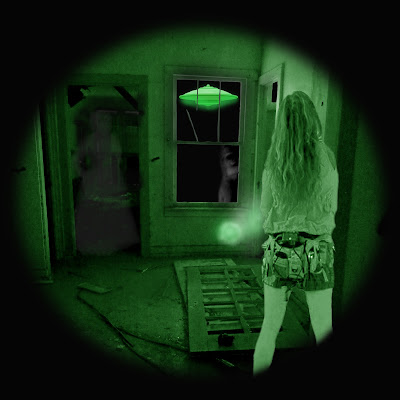 You're going to get a tone from me that I'm not super impressed with the tools of the trade and I'm not. Having lived in a haunted house from birth to teens, I know that the best tool we have is our senses, including the sixth one. We can't prove anything to others with those senses other than describe an experience, but ultimately we have yet to create the ideal ghost hunting tool.  All these expensive bells and whistles are just that -- distractions. Here's the limitations-

Electrician's tools (K-II, EMF meter) Unless one is hunting within a shielded environment in controlled conditions, the meter only tells you that of what we already know - that electromagnetic fields are everywhere around us in our world, sort of like how you walk down your hallway on a cell phone talking while your wireless printer is spewing a photo from the computer in the back bedroom to the living room.  These absolutely do not tell us if a ghost is present or trying to present itself. No matter how much we try to make a correlation between activity and electrician's tools, there is nothing other than the occasional coincidence. Spending time staring down at a meter is making you miss what is going on around you. EMF readings are proof of nothing except the one condition in which EMF is so high it might be affecting the human body. That is completely different than the concept of EMF equaling spirit presence. Other than using the meter to find out if someone's bed or chair is near high EMF that might be causing their issues in those locations, reading EMF is not going to tell you about ghosts. It's going to tell you about electromagnetic fields that might make you feel funky. Feeling funky and having ghosts - two separate issues.

Talking boxes: (Ovilus, Frank's Box, Ghost Box)  I know some pretty reasonable people who have been brought over to the talk box side. I understand this for the same reason KII meters were attractive. I once spent a good 10 minutes having a responsive conversation with a KII meter that answered me succinctly each time. Then, well, the air-conditioner in the room turned off and so did the meter. Ten minutes later when it turned back on, the meter started to say "hello" again. When you run a sweep through radio frequencies and capture the occasional broadcast word, your mind has a wonderful way of trying to find a word in the nonsense or to capture the one word you heard that applied.  This is not ghost hunting. This is that shiny 8-ball you had as a kid and asked questions to. The ever popular ghost box that spits out words that were programmed by someone to correlate with certain readings on the meter is a total parlor trick. Who programs these words? How do they know they apply? It's all a lot of tomfoolery and I won't use them. Never. Nope. Nada. It is taking your time and attention away from your environment. There is no "easy" way to talk to the dead that involves someone making a box that picks up random words or radio frequencies.

Temperatures: (Thermometers, thermal imagers)  Many times, I can tell you I have goosebumps or feel cold, but it isn't always going to register. We still have no way of knowing if that sense of being cold is something going on internally in our body or external in the environment. We also don't know if that means anything in relation to spirit activity.  Other than being able to say "yup, the temperature went down" (which our bodies already told us), this meter is taking your eyes and attention off the room.

Cameras: (nightvision, full spectrum, digital, DVR) What I would give for a camera that could effectively pick up what I'm seeing! Why can't we model one after the human eyes with all its foibles and poor night vision! We have tried infrared to see at dark, thermal to see heat, full-spectrum to take everything into account, digital cameras, digital camcorders and more! Still, the unexplained shot is an exceptionally rare thing that the odds just aren't with you. Trying to debunk a photo can be incredibly easy when it's something like orbs, reflections, slow shutter speed, and someone's finger blocking the flash, but unless you took the photo and knew the conditions and tried everything in your capability to figure out how it did it, you are likely to go home, look through the photos on the computer and then find the anomaly, too far away from the time and location to know what happened. I advise people to use a tripod so slow shutter speeds don't become and issue when there is slight movement, don't photograph where there are glass covered pictures on the wall, glass cases, chandeliers. Don't take photos after you just walked through the room--lots of dust kicked up. Be wary of what your fingers do when the flash goes off. Try to remove the strap from the camera and tie back your hair. There are so many necessary controls that it can be very frustrating. And, always take pictures of the site with the lights on or daylight so you can look back later and see what is in the room when you can see the whole room and not in some close-up IR shot.  Finding a true phenomena on camera is a very very rare event, so treat your photos with anomalies with great skepticism.

Spiritual: (Ouija, pendulum, dowsing rods)  These tools drive some people nuts and they are real hot buttons for folks who carry on the traditions of "after a friend used a Ouija" or "when I was a kid and I used a Ouija." The truth is, it's a piece of board with a plastic planchette. You use your voice recorder to ask questions of the dead and ask for proof of their existence, so do not think they are any different. If you think the board is a conduit of some type, then so is your voice recorder or that wall you asked them to rap on, or that flashlight you left unscrewed for them to turn on.  I have in experiments found the dowsing rods to be unbelievably accurate at crossing over in spots that a psychic identifies as having energy. What this energy is and the significance is unknown. The psychics themselves can be very intuitive, but there is still no verification since they are the only ones getting this information supposedly from another realm. I am a psychic and I use my abilities to best tell me where and when to be ready for action in a place. I don't use it as a proof of a haunting, but I use it like a bloodhound tool. Once again, you can prove nothing with spiritual tools and they are limited by the abilities of the people using them. They also are based on the supposition that we are talking to the dead which may not be the case.

Audio: (digital voice recorders, analog magnetic tape recorders)  Perhaps the most promising tool is a digital voice recorder. I know some folks like analog recorders with magnetic tape, but their motors can make noises that can confuse. Digital goes nicely right onto the computer for listening. We all know the limits of audio, the biggest one being interpretation. The other limitation is how well the session was controlled. There are a lot of necessaries in a good EVP session, such as recorders around the room, everyone in one place so there is no wondering if someone in another room made a sound, the need to "tag" (announce) tummy growls, coughs, passing cars so later when the team reviews them they can know what might have caused the sounds. I have some future experiments planned in the audio realm and I am anxious to see if they prove helpful in understanding communication and where and how it comes about. Unless something is a class A (everyone who hears it, hears the same thing without prompting), I'm not super thrilled by the results. More often than not, responses are unrelated in timing or to the question.

I am not certain how or when we will come up with more efficacious methods for hunting ghosts, but I do know that until we form experiments to find out how they affect our physical world to the extent we can pick them up with our senses, we will not know what energy or mechanism they use and what tool therefore would be ideal. We are playing darts with a blindfold at this point. I have hopes for the future, but they involve physicists and perhaps interdimensional work....