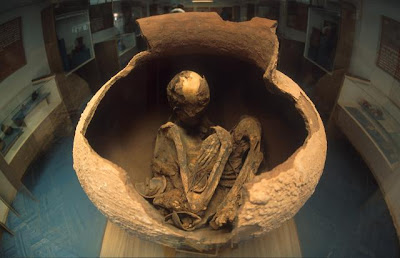 A Chilean UFO/alien episode of “Destination Truth” prodded me to write more about the subject of the Chilean (Chile has the largest copper mines in the world) mummies and aliens, UFOs, and the mining areas. I wrote a post about the connections in heavy mining areas with UFO sightings and alien sightings. A copper mine in Mexico was the place where the “Starchild” skull was discovered by a woman hiding from a storm. This skull has been examined extensively and confused the experts with its alien-like features. An episode of "Monsterquest" pursuing the flying humanoids sightings in Mexico led the public exposure of a small alien-looking creature supposedly killed by a farmer and whose tiny body is being examined by experts who are baffled by its human-like shape and strange cranium and upright posture.

First, let’s discuss the Chilean mummies. They are described well by Wikipedia: “The Chinchorro mummies are mummified remains of individuals from the South American Chinchorro culture found in what is now northern Chile and southern Peru. They are the oldest examples of mummified human remains, dating to thousands of years before the Egyptian mummies. They are believed to have first appeared around 5000 B.C. and reaching a peak around 3000 B.C. Often Chinchorro mummies were elaborately prepared by removing the internal organs and replacing them with vegetable fibers or animal hair. In some cases an embalmer would remove the skin and flesh from the dead body and replace them with clay. Shell midden and bone chemistry suggest that 90% of their diet was seafood. Many ancient cultures of fisherfolk existed, tucked away in the arid river valleys of the Andes, but the Chinchorro made themselves unique by their dedicated preservation of the dead. The Chinchorro mummies are significant because during the periods of these mummies, everyone who died was mummified, including children, new-borns and fetuses. This shows that it was not reserved for those of high rank or high status - mummification was not a sign of social stratification. Radiocarbon dating reveals that the oldest, discovered Chinchorro mummy was that of a child from a site in the Camarones Valley, about 60 miles south of Arica and dates from around 5050 B.C. The mummies continued to be made until about 1800 B.C., making them contemporary with Las Vegas culture and Valdivia culture in Ecuador and the Norte Chico civilization in Peru. The Chinchorro mummies are the earliest examples of the deliberate preservation of the dead. The mummies may have served as a means of assisting the soul in surviving, and to prevent the bodies from frightening the living.”

The massive amounts of baby mummies were believed to be the result of mercury poisoning which is very high in Chile. Mercury poisoning the waterways is common in copper mining areas, especially long ago when no one understood the environmental ramifications. But, could the mercury cause more than just poisoning? Here are just some of the symptoms of mercury poisoning: irritability, anxiety/nervousness, often with difficulty in breathing, restlessness, exaggerated response to stimulation, fearfulness, emotional instability, lack of self control, fits of anger, with violent, irrational behavior, loss of self confidence, indecision, shyness or timidity, being easily embarrassed, loss of memory, inability to concentrate, lethargy/drowsiness, insomnia, mental depression, despondency, withdrawal, suicidal tendencies, manic depression, numbness and tingling of hands, feet, fingers, toes, or lips, muscle weakness progressing to paralysis, ataxia, tremors/trembling of hands, feet, lips, eyelids or tongue, incoordination.

Are these sightings of UFOs and alien-like creatures a sign that aliens are attracted to mining areas for reasons of resources?

Are the sightings of UFOs and alien-like creatures a sign of mercury poisoning and issues with the mental state of the locals, especially those who live close to the mines and drink water that’s been corrupted by mercury?

Are these alien-looking creatures somehow a life form affected by living and evolving in the mining areas that are corrupted by mercury?

Are none of these issues related? Are lights in the sky and flying humanoids completely unrelated to the reports of strange alien creatures? Could these creatures actually be a process separate from the UFOs, such as a creature that evolved within the caves with large eyes and colorless skin to survive the conditions?

Are the lights and UFO sightings actually some form of earthlights or spooklights caused by the mineralogy and tectonics of the area and the alien-looking creatures a legend born from fear of the caves and mines?

I would love to hear theories y'all might have. This is an interesting and perplexing set of phenomenon, very regional, and definitely worth theorizing.