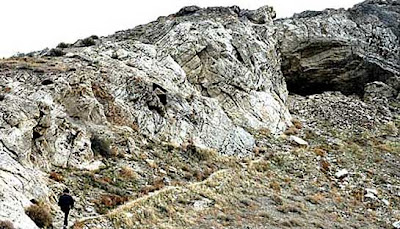 Paiute tribes told of an ancient giant people as tall as 12-feet with red hair. These huge warriors fought against them and were fierce and powerful. The Pauites told settlers that when there were only a few of the giants left, they chased them into a cave where they filled the opening with brush and burned it. At one point, an earthquake covered the opening of the cave.

In 1911 in the Lovelock Cave in Nevada, the cave was unearthed and the bat guano which turned to saltpeter was used for gunpowder and so mining began inside. It was 13 years later when they came across some of the debris not tossed out. This contained a female and a male skeleton with red hair. The female was 6-1/2 feet tall, the male was 8-feet tall.

(from a great post on this subject) As the excavation of the cave progressed, the archaeologists came to the inescapable conclusion that the Paiutes myth was no myth; it was true.

What led them to this realization was the discovery of many broken arrows that had been shot into the cave and a dark layer of burned material under sections of the overlaying guano.
Among the thousands of artifacts recovered from this site of an unknown people is what some scientists are convinced is a calendar: a donut-shaped stone with exactly 365 notches carved along its outside rim and 52 corresponding notches along the inside.

But that was not to be the final chapter of red-haired giants in Nevada.

In February and June of 1931, two very large skeletons were found in the Humboldt dry lake bed near Lovelock, Nevada. One of the skeletons measured 8.5-feet tall and was later described as having been wrapped in a gum-covered fabric similar to Egyptian mummies. The other was nearly 10-feet long. [Nevada Review-Miner newspaper, June 19, 1931.]