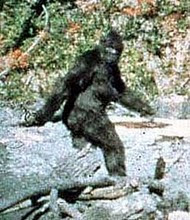 Interdimensional: Many claim Bigfoot disappears in thin air, comes out of portals (Hunt For the Skinwalker--an excellent horrifying tale), and that their tracks just stop in mid stride. For folks in this camp, it's also evidence that BF is hard to find. He simply goes in and out of our 3-dimensional space. I think we'd all have to agree it would take a certain amount of energy to open up a portal and that should be something heard or seen or come across by campers, hikers, and hunters. Not so sure about this explanation, but I am a huge fan of interdimensional concepts.

Ape Divergent: Black, hairy, big, strong, lives in the wild. It must be ape, right? Some, like Matt Moneymaker and Jeff Meldrum, have spouted the "Bigfoot is an ape" assumption. I can see where they get that from a very basic point of view. They don't seem to favor technology, but natural living which would make them more beast, right? They are hair covered and strong and big, right? It skips over the part of upright walk which it does as readily as we do, as well as their obvious intelligence in being able to keep themselves well secreted. I admittedly am not in this camp at all.

Ancient Giants: Large skeletons, around 7-feet tall and taller, have been discovered around the world. Were these just aberrations like those with pituitary gland disorders or were they a race we thought time had forgotten, but like the cholacanth fish thought long extinct and found again in recent times, it popped back into our view right under our noses? This seems very plausible, and yet I would want to know what kind of verification we have of these giant skeletons. I've seen some ridiculous pics from Russia and the Middle East that were hoaxes, and I hear people talk often about them being found, but I'd like to know first if they have been discovered in groupings where it's not just one random tall skeleton, but a family of them.

Nephilim: Referred to in the Bible as the heroes of old, men of renown. They were reportedly the children born to the "Sons of God" by the "daughters of men", and are described as giants. I understand that there is much debate as to whether they were just the fallen or cast out or if they were giants. Interpreting these old Hebrew stories is always a difficult endeavor and to take them as fact another difficult endeavor, but I understand that to explain something that defies evolution and also defies God's design of man, this would be a tidy explanation that still works within the Bible's teachings. I am not so caught up in the concept of a spiritual being taking human form and mating with women and especially giants. It seems to me logically that these women would have raised their babies and those children would have breed among man and yet Bigfoot keeps themselves quite separate from us.

Ancient man: This is the most popular theory, especially that BF could be a descendent of Austrolopithecus, a hairy, enormous creature in the family of man that we assumed didn't survive the evolutionary process. This assumption has the largest path of followers and for good reason. It's a pretty logical assumption. Bigfoot does not scramble around on all four and act like apes, seems intelligent and is upright, but certainly isn't building skyscrapers and driving a BMW. So, ancient man, right? This has its merits and it's entirely possible that they somehow were able to mate with ancient man to create today's Bigfoot. I have a theory that ancient man was able to breed with a larger group of divergent types because of the spread of man across continents and the lack of general population of their own kind to breed with. Like a lion and tiger being able to breed, perhaps man could breed with a very different form of man.  Over time, as he settled into communities and bred within, the need to breed with a wider grouping was no longer necessary and hence today man cannot breed with others such as chimps. Just a thought, but something to consider.

Alien:  There is a growing group of people correlating UFO sightings with Bigfoot areas and taking the concept that Bigfoot seems to disappear mid stride and cannot be found easily to mean that he is of an alien race, perhaps taking a little rest stop here on the way to the Vega System. Should this be a race of aliens who either settled here or visit here, they are certainly the worker slaves and not the drivers and designers of sleek traveling ships. They simply aren't made to be high-tech.

So, what is Bigfoot? Hopefully when we do find out, we will take that information with the proper amount of reverence, first for the fact we proved he existed, then for the fact he knows to evade us, and lastly for whatever he is found to be. This opens a whole new door for science and I do hope it sparks a generation who seeks answers in anthropology, ancient records, and curiosity about the other wonders yet to be uncovered.

He might not just be a myth any longer, but he might be the poster boy of a new era of discovery.