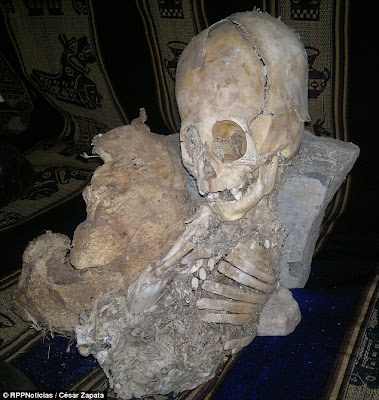 This mummified elongated skull was found in Peru. It has strangely huge eye sockets.  Making the mystery even more creepy is the anterior fontanelle as found in children under one year old, but two adult molars in the mouth. The 20-inch skull is nearly as long as the body. Supposedly Spanish and Russian researchers came to look it over and pronounced it not human, but need some time to decide what it is. The mummified specimen had remains of an eyeball which are being checked for DNA. Now, it wasn't unusual for them to wrap baby's heads so that they would be reshaped and elongated. 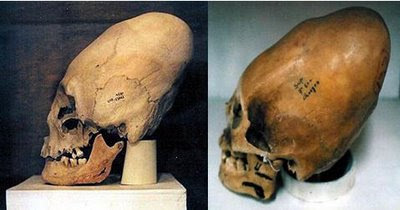 Skulls found not far from the Nazca lines in Peru were elongated on purpose when a baby was young and the skull pliable. Why they felt the need to have a head shaped like this remains a great mystery.

The starchild skull is a 900-year-old skull found in a cave in Mexico. It appears to be a 5-year-old child with some very unusual features, such as a cranium larger than the size of an adult. It also has an optic nerve that attached at the bottom of the eye instead of behind it. The back of the skull is flattened but not by unnatural means. Interestingly, DNA has shown the mitochondrial mama DNA to be human but papa's nuclear DNA is still not able to be recovered.

This odd fat skull (above) showed 15% larger than normal eye sockets and a cranial capacity that is twice an adult human.

Learn more about these skulls in this fascinating article.