It came to my attention seeing the compelling videos being released by MK Davis online (many vids found here) that Bigfoot seems to have some exceptional commando skills. Are they the forest commando equivalents? Well, he's managed to hide quite well and, interdimensional escape theory aside, he seems to be able to just back himself into an environment and blend.

Assumptions we can make:
They are rarely seen. There is enough for a breeding population in quantity. They are also very large and with a high caloric need, so they would have to be experts at getting food efficiently, quickly, and with as few a bodies out in the open as possible.

This would require the use of bushes, trees, and shadows to help them blend in. Because of height and risky open areas, they would need to be extraordinary runners, creep-walkers and hoppers on all 4's. We see those features in some of MK's released videos. There appear to be ways to minimize their enormous size and therefore their vulnerability at being seen.

That they do have body hair is probably to their advantage in being able to retreat into shadows. Imagine a naked human male in the woods and then a Bigfoot--one could step back and be lost in the shadows, the other would still be glaringly apparent.

So, their musculature and their hair have helped them in environments with wide temperature changes and the need to pull their body weight up into trees and run and creep and even commando crawl and jump far distances. The BF I saw in the Sierras had extraordinary thigh and butt muscles--those would be critical for a runner but also the upper body strength to be able to pull up such a weight.

I've read some reports where people say a Bigfoot climbed a tree and made himself blend in with it, tuck himself up to become part of the tree. Being able to stop and be very still so your movement doesn't give you away, being able to take one step back behind a tree, being able to stay low and move fast through open areas--all critical to his survival and lack of detection. 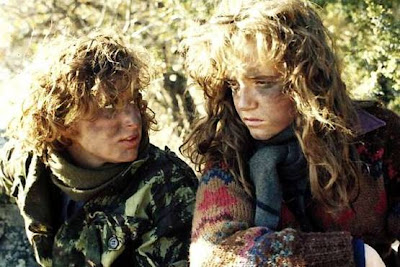 The movie "Red Dawn" showed man going into BF's environment and surviving and hiding from the invaders who are trying to find and kill them. They developed many of these characteristics.

Keys for survival:
Blend in, use what is available, and adapt your physicality (weather tolerance, strength, dexterity, agility, and 5 senses) to withstand it. There isn't just the issue of hiding from dangerous humans, but also the need for hunting/fishing and other acquisition of food sources and shelter that would mean an ongoing robust health and constitution.

Ultimately, looking at this commando of the woods, I am not only extremely impressed and so very proud of this race's ability to survive in spite of our general population's encroachment. I believe that, as we have the highest respect for our special ops forces, we must also respect the kind of skills and drive it takes to be a forest commando.

I am happily reminded of Inspector Clouseau and his desire to keep his skills intact by using his houseboy's ninja skills to surprise attack him.