Over Niagra Falls in a Barrel 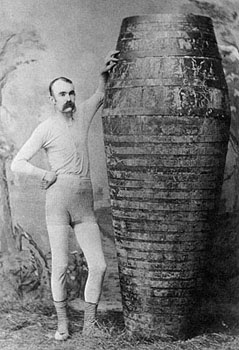 Niagra Falls, linking Lake Erie and Lake Ontario has the highest flow rate of any waterfall in the world. So, what else do you think when you see such a powerful force except the obvious - I wonder if I can go over it in a barrel and survive?
Wikipedia

In October 1829: Sam Patch, "the Yankee Leapster", jumped from a high tower into the gorge below the falls and survived. October 24, 1901: A 63-year-old Michigan school teacher Annie Edson Taylor was the first person to go over the falls in a barrel as a publicity stunt; she survived, bleeding, but virtually unharmed.

Since Taylor's historic ride, 14 people have intentionally gone over the falls in or on a device, despite her advice. Some have survived unharmed, but others have drowned or been severely injured. Survivors of such stunts face charges and stiff fines, as it is illegal, on both sides of the border, to attempt to go over the falls."

The "Miracle at Niagara", Roger Woodward, a seven-year-old American boy, was swept over the Horseshoe Falls protected only by a life vest on July 9, 1960, as two tourists pulled his 17-year-old sister Deanne from the river only 20 feet (6 m) from the lip of the Horseshoe Falls at Goat Island.Minutes later, Woodward was plucked from the roiling plunge pool beneath the Horseshoe Falls after grabbing a life ring thrown to him by the crew of the Maid of the Mist boat.

On May 21, 2012, an unidentified man in his early 40s became the third person to survive an unprotected trip over the Horseshoe Falls. Eyewitness reports indicate that he "deliberately jumped" into the Niagara River after climbing over a railing.

That anyone looks at those falls and thinks "I'm gonna take a wild ride and survive," is puzzling, but it appears that even those who are intent upon ending their lives or stupid enough to fall in and get sucked down, sometimes survive. That they do, is perhaps the greatest wonder of all.