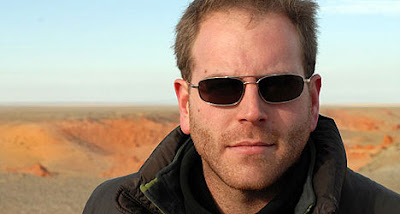 Here's what he had to say.

The first two episodes are on opening night, Tuesday July 10th on Syfy. One is an hour-long Vietnam episode that supposedly catches the most amazing video of a potential Bigfoot in a cave.

This season, he's going back to the Romanian Forest again--first time they ever revisted a site. He even talked Evan into flying in for that episode (the past cast member who was picked up and tossed the last time they were in this strange circle in the woods where no trees grow).

They are also doing a UFO episode where he saw something he could not explain (even though he does not believe in alien visitors).

He never believed in Bigfoot, but after going all over the world and hearing sooooo many stories about BF-like creatures, he is thinking there might be something to the story.

They also go to Mayan ruins, Tikal, where the are thousands of buildings and also pyramids. One graveyard they visit has coffins attached to the cliffside. They also go to Sweden, Fiji, Guatemala and other locales.

Vietnam Bigfoot is described as smaller, more compact, fur is described as red or red-brown, so a different than the US Bigfoot. It is seen but, hard to track, elusive like the BF in the US.

So far as the technical, they have added a submersible in an episode.  Better cameras with wider views, and underwater equipment for the season.

All in all, this is shaping up to be a super creepy season!!