Were the Sumerians Right? Are We Alien? The Sumerians had a most unusual belief in how humans came about because it sounds more like science fiction than mythology. They believed that intelligent creatures came from another planet and created us from a combination of their DNA and the DNA of prehistoric man. They called DNA "essence" and in their ancient writings (the Sumerians were the first to create written language) say about prehistoric man's essence:

"Akin to ours it is, like two serpents it is entwined"

We are all familiar with the symbol of entwined snakes. The symbol is used later by the Egyptians as a staff carried first by Iris and then Hermes. Greek mythology also incorporates the symbol. The symbol has adorned the walls of our hospitals since long before we knew DNA shared the double helix shape.

The Sumerians state in their writings that a rogue planet, referred to as Nibiru found its way into our solar system and collided with Earth, creating the asteroid belt and leaving behind a moon--our moon. Because of the collision, Nibiru became part of our solar system. According to them Nibiru is the home planet of the aliens that created us, the Annunaki. The reason we do no know of this planet, if it is real, is because it has a massive eliptical orbit that only brings it near us every 3600 years. According to Sumerian text, the Annunaki used Mars as a way station, which could explain the peculiar face that we see on Mars' surface as well as the markings that seem as if they were created by intelligent creatures.

The Annunaki do not see themselves as gods, but merely superior creatures on a planet with a deteriorating atmosphere. Supposedly, they sent robot scouts to Earth before coming in person, similar to what NASA has done on Mars. They came here in search of gold which they say will restore their atmosphere. It is in fact possible to use gold (Au) to oxidize carbon monoxide (CO) which could indeed increase the amount of oxygen in an atmosphere--especially one that his heavily polluted. Initially, they mined the gold themselves, but having great knowledge of genetic manipulation, they devised a plan to create a hybrid species to mine the gold for them. It was a great moral debate as they argued whether or not they should play the role of gods, but eventually they agreed to proceed with our creation. Sumerian hieroglyphics show how we were created in glass tubes. Sumerian carvings and indentations portray the Annunaki as having elongated sculls, which is eerily similar to a god the Aztecs claim visited them, asking them to mine gold. The Aztecs even took to wrapping their babies' heads so that they would grow to be elongated like their god.

Something else to consider? Roswell crash scene I-beam that had "hierglyph" looking symbols - 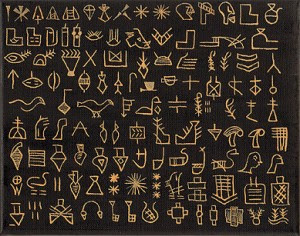 Like I usually do on this theories blog, I'm going to leave you to sit on this and let it gestate. I want to hear your thoughts.