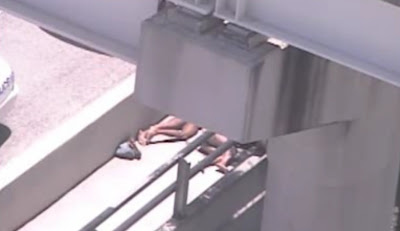 Real life is freakier than anything we can dream up.

"Miami police shot and killed a man on the MacArthur Causeway Saturday afternoon, and police sources told CBS4 they had no choice: the naked man they shot was trying to chew the face off another naked man, and refused to obey police orders to stop his grisly meal. ...Officers found one man gnawing on the face of another, in what one police source called the most gruesome thing he’d ever seen."

At that point, the police officers shot the zombie once, but he continued feeding on the other man's face. They were forced to shoot him again, which mercifully killed him. Then they sought to aid the victim whose face was already mostly eaten off.

"With the attacker dead, lying nude on the pavement, officers and paramedics were able to get to his victim and rush him to Jackson Memorial Hospital. Police sources say the man had virtually no face and was unrecognizable. Once the bizarre confrontation came to an end, police were left with the task of figuring out what had happened..."


On that happy note, I hope y'all have a pleasant day and be aware that at any time the person next to you can turn and start feasting on your face.