Proof of the Apocaypse: Body Parts 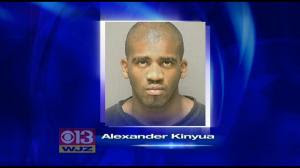 This is a new series that will have posts about things in the news that sound rather end-of-world'ish. I just reported on the man who ate another man's face and the one who threw his own intestines at the police. Today, we trek into yet another grisly proof of end of times -

In Maryland, a man confessed to killing his roommate and eating his brain and heart. This 21-year-old college student from Kenya supposedly cut off the victim's head and hands and stored them in the townhouse.


Police say the man's brother went down to the laundry room of the house and saw a blanket on a box.  He pulled off the blanket and saw two metal tins.  Police say he opened them and saw a head and two hands. When the killer's brother confronted him about this, police say the killer said they were animal remains and not human remains.

Believe it or not, the killer was out on a bond after he was charged May 20 with a random attack on another student, leaving that victim with a fractured skull, arm and shoulder, and blinded in the left eye. Out on bond after that, really???

Well, just another freaky incident that has to make you wonder--what is in the water?