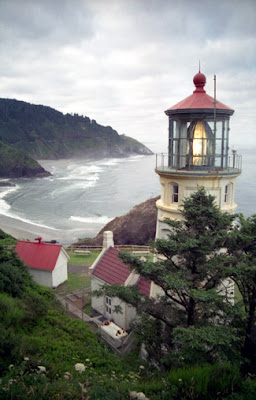 On a bluff hundreds of feet above the sea, Heceta Head Lighthouse in Oregon is not only a paranormal vacation destination, but a wonderfully luxurious, romantic, and gothic retreat.
The tower is 56 feet tall with a focal plane of 205 feet above sea level. The most powerful light along the Oregon coast, the light can be seen 21 miles out to sea. It first came on in 1894.

If you wanted to go there this summer, you're in for some sad news. The waiting list can be 3 months long for this bed and breakfast that serves a 7-course gourmet breakfast. The cookbook can be found here.

Stories have been spread about it being haunted. It has had some unusual activity, but no explanation for its origins.

The Lady in Gray, or Rue as she is now known, was the wife of an assistant light keeper in the 1890s. It is said that her young daughter drowned in the local estuary or the ocean and, in despair, the mother committed suicide. The location of the young girl's grave is not exactly known, but the headstone supposedly resides somewhere in the vegetation surrounding the lighthouse. Rue now haunts the Heceta Head Light, ever searching for her long-lost daughter.

This is high on my list of dream getaways with a fella. But, first I have to find a fella. Then, I have to wait 3 months on the waiting list!