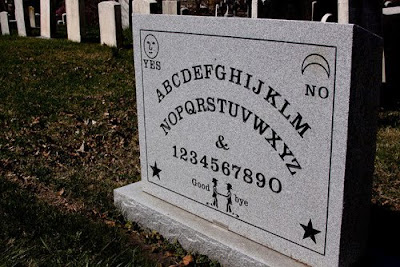 Elijah Jefferson Bond was a lawyer and an inventor (aren't those two always associated?) He invented many things, but was best known for the patent for the Ouija Board in May 28, 1890.

To learn more about his life and his Kennard Novelty Company, go here.

The Ouija board has been utilized in a ridiculous amount of horror movies and just some of them are; The Uninvited, Thirteen Ghosts, The Exorcist, Awakenings, What Lies Beneath, Paranormal Activity, Amityville 3-D, Witchboard, and Only You.

In 1966, his estate sold his company and its games to Parker Brothers. which was sold to Hasbro and hence the Ouija spirit boards we know today.

In the Green Mount Cemetery in Maryland, Elijah Bond was laid to rest with a Ouija Headstone. If they had laid it flat instead, one might have been able to converse with him...