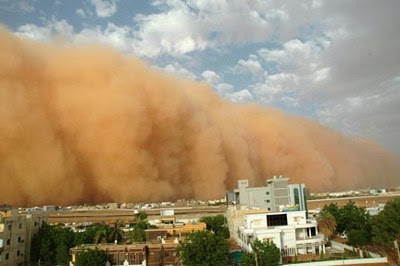 My first experience with a haboob was when I was 14.

I had just moved to Arizona and had no idea that they got weather that was just dust! I was outside looking at a coming storm in the distance in 118-degree heat, and wishing for some rain. I noticed the desert got a nasty smell before a rain. For a gal who grew up in green territory, coming rain was clean and fresh. This smell was pungent and funky. I later came to find out it was the oils in the creosote bushes being released into humid air. A sign of a coming monsoon storm.

Our monsoons, however, begin with a wall of dust that is part of the wind gusts of the coming storm. The longer it's been since the last rain, the taller that wall of dust!

I watched a funny orange cloud in the distance slowly engulf street signs and light poles and homes until it was upon me without warning. I was sandblasted hard. A few weeks later, I was sicker than I've been in my whole life. The dusts in the desert also carry a fungus that can cause an illness called Coccidiodomycosis or "valley fever." Coughing, weak, sore, feverish, with thrush and barely able to lift my head, I lost 15 pounds, vaguely remember that entire summer. Lots of people never knew they had it. I, however, was knocked on my butt.

They are truly amazing feats of nature, but you definitely do not want to be stuck in one. In fact, we're told to pull over off the road and turn out our car lights so no one follows our lights thinking we are still driving. Tons of accidents occur and then the following hard rains hitting the hard baked earth aren't able to be absorbed by the ground and washes fill extremely quickly. Our storms aren't often, but when they are, they can be very deadly. I now respect the orange cloud and hasten indoors and hunker down.