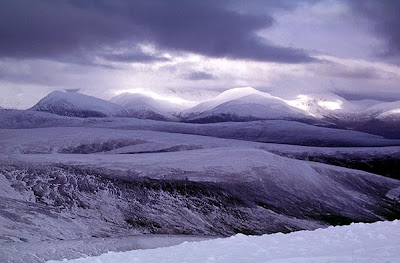 Also known as Am Fear Liath Mòr, the Big Grey Man of the Cairngorms has been rarely reported in the UK, but intriguingly endearing in legend. Somewhat like the USA's Bigfoot or Indonesia's Orang Pendek, this "creature" is said to be man-like and (Wikipedia) haunts the summit and passes of Ben Macdui, the highest peak of the Cairngorms and the second highest peak in Britain. It has been described as an extremely tall figure covered with short hair, or as an unseen presence that causes uneasy feelings in people who climb the mountain. Evidence of the existence of this creature is limited to various sightings and a few photographs of unusual footprints.

In the Matt Lamy book 100 Strangest Unexplained Mysteries, Lamy notes a sighting in the early 1990s in which three men caught sight of a bipedal creature with an eerie, inhuman face in a forest near Aberdeen. Several weeks later, whilst driving through the area at night, the creature appeared again and ran alongside their car even at speeds of 45 miles per hour, seemingly trying to enter the vehicle.

I find this to be spine-tingling and unsettling.