Bigfoot: Do My Genes Make My Butt Look Human? 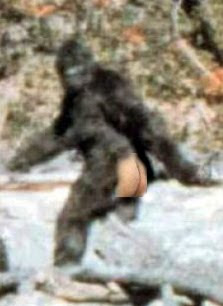 There's a lot of hoopla surrounding Dr. Melba Ketchum's results from the Bigfoot Genome Project. Even though everyone associated with the study of samples submitted are sworn to secrecy, much has leaked out. But, like any other endeavor to shut people's traps, we really don't know how accurate any of the leaks are.

Let's just look at the rumors that are circulating and their implications:

I am not going to make this an intellectual discussion with a lot of big words. Even though I'm in the medical field, I find that kind of talk drivel. Basically, the first rumor comes down to this--many have hinted that BF's mama was 100% human, but daddy might have been more primitive. Honestly, that sounds like most of the humans I know.

So, would this make Bigfoot a human? Well, let's look at some slight shift in human DNA and the changes that can result. Let's take albinism and Down Syndrome. A little shift in DNA and voila! These variables in our DNA make it possible to have a huge variety of humans, with vastly different looks and capabilities. Of course, all variables of humans are still human.

But what makes us all human?

Does the 100% blood of a human mother lineage make BF a human or does the half that is from more primitive man make him ape? If a person has a genetic disorder that creates severe global developmental delay, does that make him not human because he cannot communicate or understand? Does BF, because he has no language we understand and lives in a primitive existence, be a human only with developmental delay? Would raising him amongst us show a level of intelligence that astounds us or could that bit of ape genes make him only as trainable as a chimp? Remember ape genes are 98% similar to ours, but that 2% makes a huge difference in language, intelligence and walking upright.

If this rumor were true, it may be a relief to realize that BF is not all beast, but then it also opens a new can of worms that none of us are prepared for. We might have a feral cousin in the woods who has been surviving on his own, but he might be that missing relative that would explain much of our own process of arriving as homo sapiens. This creature, walking erect for quite some time, has had the same free hands we had to fashion tools and be intelligent. Perhaps the very reason he has not been caught as of yet is that he is very cognizant of himself as a thinking, living, breathing, spiritual and physical being and also understand the "others" (man).

My problem with his concept is simply that, though it might be possible for a primitive man to mate with a modern human, the result should be like a liger (lion/tiger) or a better example is the mule which is bred from a female horse and a male donkey. These creatures are able to breed, but the offspring are sterile. In other words, the gene roulette wheel stops with the liger and the mule.

The other rumor is that all the samples tested were 100% human! What the hell does that mean? Well, without knowing the basis on which samples were taken, it means humans contaminated the samples or...it means BF is purely a feral human. However, even in humans that tiny genetic difference can change appearances drastically. How? Well, let's look at a genetic condition that could create an unusual appearance.

Hypertrichosis, a condition of overgrowth of hair all over the body is passed down through a family line. What if Bigfoot is a result of inbreeding amongst very rural families or tribes in Early American who have managed to have, generation to generation, hidden their ways like the Amish, inbred to the point of carrying on pituitary growth disorders and hypertrichosis? Could the reason some people see what looks like wild people and others see what looks like apes be different members of isolated families?

Here's where it gets even hairy (pun intended). How is it that places as isolated geographically as Australia and as vast as China, Russia and the United States have Bigfoot-like sightings with slight differences in appearance that might relate to breeding in isolated regions? This makes the case for an actual creature and not a band of wild rednecks.

Around and around this puzzle goes and where it stops--no one knows until we have a BF in the flesh and blood to examine. The other option is that, if it is true that some twisted hunter shot a BF and its baby (rumor) and got a sample from those and submitted them and they came out human, we can all baffle even more over the mystery that is BF. Otherwise, hair, blood, and other stray samples can easily be from humans in the woods. Unless you pluck a hair from BF or shoot a hole in his cute furry butt, you're not going to be able to get a true sense of him genetically because everything else could be our own blasted leavings in the woods. And, should a sample of DNA come up with mutations, we can't take those as a baseline for BF because if you were to sample someone with Trisomy 13, they would not represent baseline for typical human genes. In this case, we would have to herd up a helluva lot of BF's to find out what his standard genes look like and given that my entire lifetime they've been looking for the fella and not capturing him, I'm thinking in our lifetimes we won't know just what exactly a BF is genetically or in classification with any certainty.