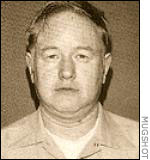 I remember the 70s and the lots of weird serial killers of that era. Sometimes, their names were horrifying and other times, so innocent that it was hard to believe the press couldn't collectively give them better names. Here's just some of the ones that seriously make you wonder what the hell they did to get that moniker....

The Happy Face Killer Keith Hunter Jesperson - Keith Hunter Jesperson (born 6 April 1955) is a Canadian-born American serial killer known as the "Happy Face Killer" for the smiley face he drew on his many letters to the media and prosecutors. He had a violent and troubled childhood under a domineering, alcoholic father. Treated like an outcast by his own family and teased by other children for his large size at a young age, Jesperson was a lonely child who howed a propensity for torturing and killing animals. Despite consistently getting into trouble in his youth, including twice attempting to kill children who had crossed him, Jesperson graduated from high school, secured a job as a truck driver, got married, and had three children. In 1990, after 15 years of marriage, Jesperson was divorced and saw his dream to become a Royal Canadian Mounted Policeman dashed following an injury. It was that year, after returning to truck driving, that Jesperson began to kill. Jesperson is known to have killed eight women over the course of five years. Strangulation was his preferred method, the same method he often used to kill animals as a child.

The Shoe-Fetish Slayer Jerry Brudos - Jerome Henry "Jerry" Brudos (January 31, 1939 – March 28, 2006) was an American serial killer and necrophiliac, also known as "The Lust Killer" and "The Shoe Fetish Slayer". Brudos was born in Webster, South Dakota, and was the youngest of four sons. His mother had wanted a girl and would dress Brudos in girl's clothing. In 1961, he married a 17-year-old girl, with whom he would father two children, and settled in a Salem, Oregon suburb. He asked his new bride to do housework naked except for a pair of high heels while he took pictures. It was at about this time, however, that he began complaining of migraine headaches and "blackouts", relieving his symptoms with night-prowling raids to steal shoes and lace undergarments. He kept the shoes, underwear, and (for a time) the bodies of his victims in a garage that he would not allow his wife to enter without first announcing her arrival on an intercom that Brudos had set up.Between 1968 and 1969, Brudos bludgeoned and strangled four young women. The only initial evidence was witness sightings of a large man dressed in women's clothing. In the garage of his Salem, Oregon home, Brudos kept trophies from his victims, expressly two pairs of amputated breasts that were used as paperweights and the left foot of a 19-year-old girl named Linda Slawson (his first murder victim) which he used to model the shoes he collected. After committing a murder, he would dress up in high heels and masturbate.

The Singing Strangler Edward Leonski - A self-described "Dr. Jekyll and Mr. Hyde," Leonski was a U.S. Army private stationed in Australia during World War II, convicted and sentenced to die for strangling three women in Melbourne. The first victim was Ivy McLeod, found dead on the night of May 2, 1942, after leaving a tavern for home. A week later, Pauline Thompson was murdered in similar fashion, with Gladys Hosking joining the list on May 28. A fourth woman was also accosted, but the killer unaccountably left her alone when she threatened to call the police. Suspicion focused on American servicemen after an Australian sentry reported sighting a GI in blood-stained clothing on May 28. Troops in Melbourne were assembled on parade, for an inspection, and the sentry picked Leonski from the lineup. Under questioning, the stocky Texan made a full confession , telling his interrogators of a twisted fascination with the female voice. "That's why I choked those ladies," he explained. "It was to get their voices." Pauline Thompson had sung for Leonski on their last date, and he recalled that "Her voice was sweet and soft, and I could feel myself going mad about it." Dubbed the "Singing Strangler" in the press, Leonski filed a plea of not guilty by reason of insanity . Convicted at his court martial and sentenced to die for his crimes, the defendant was hanged on November 9, 1942.