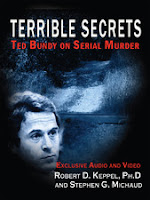 Terrible Secrets: Ted Bundy On Serial Murder by Robert D. Keppel and Stephen G. Michaud is an ebook on Kindle that is 60,000 words of spine-chilling facts from the Sheriff detective who investigated him extensively.

This book has dozens of previously unreleased photos and hours of audio and video from the case that unfolded as Bundy raped and killed from coast to coast from 1969 to 1974. It also includes a hand drawn map of a hillside where Bundy said he buried some bodies. The serial killer hinted at having killed over 100. It is a mystery that still remains.