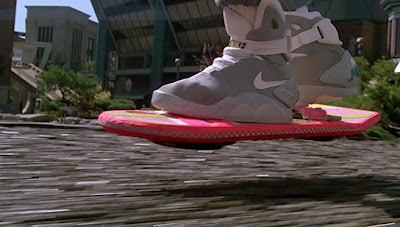 It dates me, but I got a skateboard around 10 years of age and there were no other skateboarders in my area in the East Coast. I knew kids in California were using them, but it was a mystery. It's hardly like the Sonny and Cher show or even Brady Bunch portrayed the tricks and the culture on TV.

So, I taught myself to skate and made up tricks and gave them crazy names like "upsy daisy" and "woo-woo curb hug" and "over and under." Little did I know at the time, I was already doing the tricks the skaters in California in drained swimming pools were perfecting.

Times are changing for skaters. Here's an interesting recent article; A mobile app studio has invented a skateboard that takes commands direct from the rider's brainwaves. Called the 'Board of Imagination' the device is able to travel at up to 30mph using an 800-watt motor, the rider simply needs to imagine where they want to go and how fast and the board will take them there. "The headset sends the signals from the rider's brain to [the tablet] via a USB connector that comes with the headset," said the general manager who goes by the moniker 'Whurley'. "From there, software on the board interfaces with the electric motor via a 'phidget', which is basically a plug-and-play, low-cost USB sensing and control unit."The general manager of Chaotic Moon Labs, who refers to himself simply as Whurley, shows that he has mastered the art of thinking his way from Point A to Point B. So far, he's the world's leading pilot of the board, but it's clear that there could be skaters thinking themselves all over the place in no time at all.

For me, skateboarding was purely a way to "surf" on land. I dreamed of being Gidget and living in the golden land of California and I listened to Beach Boys obsessively.

I did a few other sports extensively (tomboy); diving, swimming, gymnastics, tennis, basketball, freestyle rollerskating, dance, but nothing ever came close to the feel of a skateboard and a long stretch of promising pavement. Just look at this video and tell me you don't get nostalgic -