on February 23, 2012
I had the greatest honor to interview a Bigfoot hunter who had many tales of unusual and downright frightening encounters in the woods in Arizona's high country. This is one hunting trip that came out with a twist he didn't see coming and one that gave me chills.... 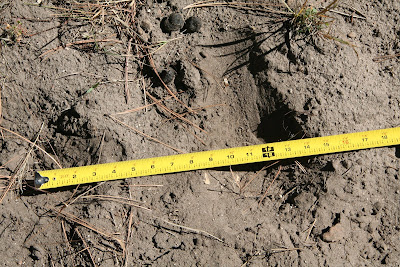 We were in this location(in Arizona's high country) because of the activity it had during the 2008 BFRO Expedition (vocalizations, chatter heard) and the 2009 BFRO Expedition (close encounter, grunts, rock clacks, knocks and tree shake) at this exact location. I had to wait until fall 2009 to get back there, and took my two children and nephew on the mini, one night-two day expedition. My son (17 at the time), daughter (14) and nephew (12).

We spent the day scouting and hiking in the canyon complex. We set up a game camera in a side canyon area, and remote recorders in various locations. At dusk we returned to camp, started a fire, cooked dinner and enjoyed some fun and laughter. We toasted some marshmallows and made s'mores. I reviewed the do's and don'ts with them about squatching, and we discussed some of the theories and had a good question and answer session. It was around 9pm when we were going to drive back to the canyon for some calls and intent listening. It was at that time my daughter told me she didn't feel so good. When we arrived at the location, she said she did not want to leave the SUV, and didn't want to stay there alone. Her brother volunteered to spend time with her, so my nephew and I walked 100 feet and set up at the knocking station.

We arrived to our position at 9:48 and I turned the SUV around so it was pointing north on the road back toward camp. My nephew and I took a digital recorder, night vision monocular with IR light, and a knocking stick. I started the recorder and leaned it against the tree in the middle of the clearing. I turned on the night vision and handed it to my nephew, then walked over to the knocking tree.

At 9:55pm I did two knocks separated by two seconds. We waited three minutes, then did a single knock. One minute later, there was a whoop from at least a 1/4 mile to the west that was very faint. I waited about a minute, then did a whoop back. We waited about 12 minutes then I did another single knock. We waited about 5 minutes then I did another whoop. A return whoop was heard LOUDLY directly across the canyon to the west. It was VERY close and surprised me. I stepped over to my nephew and told him to keep a close watch. He asked if we should respond, I told him, no... it knows right where we are! We kept the IR light on the nightvision as there was no moon. 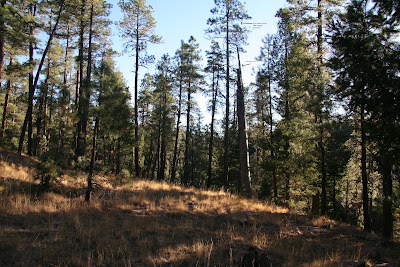 I whispered to my nephew that I was not going to point, but would instead give him directions like a clock dial (9 o'clock, 1 o'clock, etc). Within a minute I could hear a small rock slide in the creek, then all was quiet. Within 5 minutes I could hear a VERY soft and quiet footstep. The foot was laid down slow and deliberate. We were about 20 feet north of the knocking tree and six feet east and could see down the hillside a distance by starlight and very clearly with the night vision scope. I could hear the steps getting closer. A shadow kept moving or rocking in and out at the edge of the trees.

I told my nephew to look at 11 o'clock, he raised the NV and he said he saw an arm and the brush moving. I asked him for the NV unit, and the next time I saw a shadow I brought up the night vision. This time I saw a leg and foot from the calf down as it stepped back into the brush. After this I could hear it walking but couldn't see it. I handed the unit back to my nephew and had him keep watch while I listened intently. After a few minutes it stopped its quiet steps, It seemed to be a standoff, and where it positioned itself we couldn't see it. There were three instances of eye glow during this time we thought, but very dim through the brush. I'm not sure it wasn't reflection of the IR light off the eyes?

After what seemed to be eternity, I decided we needed to get it on the move again. I told my nephew that we would walk back toward the vehicle slowly and pretend we didn't care or know it was there, and when I told him 'NOW' to turn back and look into the wide gap in the trees. We turned and walked 30 feet and I told him to stop. I could hear the visitor following. We walked slowly again about 30 feet more to what I thought was a clearing in the underbrush, and when I thought I heard steps in the clearing I told my nephew, 'NOW'. He spun around, and I initially stayed facing the same direction. He brought the scope up to his eye. He simply said, 'Yep, there it is.' I said, 'Really? What's it doing?' My nephew said, 'looking at me!'

I took the scope from him, and had a look. It was stepping back to the trees when I saw it. I saw the left shoulder, arm, breast and leg. It was a female. As it stepped behind the tree, she put her left hand on the side of the tree and kept it there. It was 25-30 feet away. I could clearly see four fingers, the hair and fingernails and forearm. I watched for about 20 seconds when it peered around the opposite side of trunk. I could see the right eye for a second. I handed the scope back to my nephew, and he saw it peek out once more. Then it did nothing more and stayed behind the tree with the hand and forearm in view for a total of three minutes. It then withdrew its hand, and we couldn't see it. Later height measurements of where the hand was placed on the tree was 69 inches. 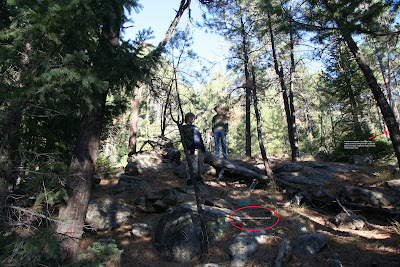 (View looking down at incident site)

We sat down and I tried a couple of rock clacks, grunts, and tried my best to mimic the Sierra Sounds. At one point it sounded like a light rock clack but we weren't certain, and we couldn't see it anymore. About this point we heard a snap up the hill behind us, and I decided it was time to head to the vehicle. We got in and scanned the treeline again. Nothing moved. The entire stop from first knock to departure was around 57 minutes!!

I asked my nephew to describe what he saw when he first turned around. He said it was standing in the middle of the clearing, and he said it had a look of surprise on its face. In fact, he said it turned and looked behind it... as if it thought we were looking at something behind it, then turned and looked back at us. My nephew said its head was more 'oval-shaped' with a high brow and appeared to have no neck. He did say there was some movement to the head when it looked back, but rotated it's body to look downhill then looked back at him. It was at that time I asked to see the scope, and by the time I brought it up, she was headed behind that tree. During the entire encounter there was no smell, and did not feel threatened. A little paranoia did set in when no footsteps were heard as we sat there.

My nephew was a real trooper for being just 12!

We got back to camp, restarted the fire, then climbed into the tent by 11:30pm. Most of the night, elk called all around us. Some coyote were heard, but almost exclusively elk calls from all directions.

Interestingly, the recorder placed in the canyon did not record the knocks or whoops I did, or the responses. The digital recorder we had at the site stopped recording after the third knock I did. I've since replaced that recorder.