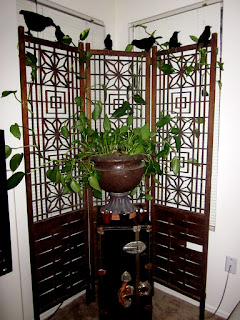 (My homage to "The Birds" in my home)

Life is a weird chain of events.

In 1961, man started a housing boom in Monterrey, California and in his hastiness, there were leaky septic tanks that infected plankton that fed the fish that birds caught and ate. This created a toxic situation in which the birds were dying and disoriented and flying into buildings. This set of circumstances, along with Alfred Hitchcock wanting to top his last film, "Psycho" and having read a story by Daphne du Maurier about birds attacking a Cornish family, he saw an ideal vehicle for a new movie that would become one of the best thrillers of all time and I put it in my top 5 movies of all time, "The Birds."

At first, Hitchcock tried mechanized birds, like remote control planes, but these looked very fake. After much work with optics specialists, new techniques were utilized, awards were won, and the movie came across surprisingly real for an early 60s film. The mechanical birds were used in a few small pieces in the film, like when the birds swayed inside their cage on the car ride, but otherwise, filming techniques and real birds made this amazing movie graphically real. They also had to subdue the happy sunny colors of Bodega Bay to get the proper atmosphere. There is something to be said about Hitchcock's tenacity and desire to suspend reality and give the proper amount of mood and atmosphere.

So, had man not been in a rush to build new housing in Monterrey California and had Daphne du Maurier not written a story of birds attacking an isolated farm, and had Hitchcock not have done a super hit in "Psycho" and wanted to top it, none of this would have come together.

So, the next time your day gives you nothing but bad shit, just remember--from shit comes compost--from compost comes healthy robust growth.