Dale the Doll: I Smell the Holidays 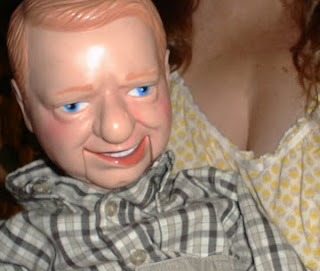 I will never understand why humans believe that sitting around a table and stuffing their faces until they feel sick and bloated and then sleeping it off to awaken and start the frenzy again at 11 at night, is a worthy yearly goal.

The Human went to her son's home for a vegetarian Thanksgiving. That had me laughing for a good half hour. I suppose that could be considered flipping the bird on the turkey. Get it? hahahaha

She did make some pies. They smelled damn good! Hey, I might not digest food, but I am still affected by scents; like the smell of the incense she burns when she's meditating, the coffee scented candle that sits beside me on the shelf, or the smell of The Human's new perfume. It's called "Breath of Fresh Air" and it smells kind of like someone opened the door after a cold winter snow and it brings in this clean smell when they shut the door. When she puts it on her golden skin, it gets the smell of the heat from her body and then pretty soon, it becomes this new smell of snow and flesh, honey and iced tea....

Oh, hell, now I'm sounding like some lovesick fool. Nope. Never. Not me. I'm not lovesick. I'm not a fool. And, I certainly never would carry a torch for a human! I just have a very sensitive nose and that's the only reason I think she smells like everything that is beautiful and right in this world.

No poetry and moonstruck lovesickness here. Nope. Never. Not me.


She's got the home decorated for Christmas already, or "Yule" as she likes to call it. I'm a bit miffed because she has ornaments of a Viking long ship and a kilted Santa to represent her Norwegian father and Scottish mother, Bigfoot and ghost ornaments to show her interests, but there is not one ventriloquist doll ornament!

I know she's going to make her famous fudges for Christmas, packaging them up in neat little gourmet bags and handing them out with recipes. I saw the recipes pulled up on the laptop; candy cane fudge, brown sugar fudge, and chocolate peanut butter fudge. I hate the freaking holidays and all the tormenting smells!