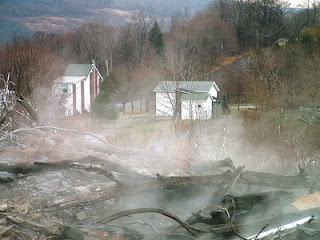 Centralia, PA: (Wikipedia) Centralia is a borough and ghost town in Columbia County, Pennsylvania, United States. Its population has dwindled from over 1,000 residents in 1981 to 12 in 2005[1] and 9 in 2007,[2] as a result of a mine fire burning beneath the borough since 1962. Centralia is now the least-populous municipality in Pennsylvania, with four fewer residents than the borough of S.N.P.J.


The back story on how the fire started in 1962 is interesting. Supposedly some volunteer firefighters were burning trash near a cemetery. What they didn't know was that coal was right near the surface of the ground there and it ignited. Though they put out the surface fire, they didn't realize that the fire blazed along the coal lined mines below. Over the following weeks, it went through abandoned mines, burning its way towards the town. When they decided to dig and see how bad the fire was, they unwittingly added oxygen to it and helped it to burn even better. Families began having carbon monoxide issues and had to abandoned their homes, businesses shut down, and over time, the entire time cleared out. It is still burning today and has enough coal to burn for another 250 years. Interesting, huh?