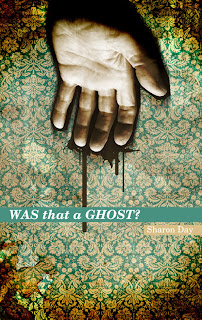 Here is a section in my book "Was That a Ghost?" (Kindle/Nook) about the subject of "Signs."

People ask me about signs a lot; those little nagging coincidences that make them feel that someone who passed on is trying to communicate. How do signs work? Is there such a thing as signs? How do I know if the signs are real or not?

Here's how I see signs, a lot like how I see bad things that happen in life. I do not by any stretch of the imagination envision a God in Heaven who decides to create bad things in people's lives to either punish them or rile them up or make them stronger.

Bad things happen in a world of free will, bad choices and mortality.

Good people don't take it personally and move on, perhaps stronger for something they learned in the lesson. The first time I backed out of a parking space and someone else backed right into me, I learned to be sure no one else was backing out when I left a spot. I do that every single time now, double and triple check. One bad lesson; much learned for life.

So, when you are driving home from a funeral and pull up behind a car with a customized vanity plate that reads “Darlin” and that was your nickname for your late wife, take that as a sign. Was Darlin' actually presenting you with the opportunity. No. I don't think the deceased have that kind of powers or else our late parents would have been certain we had the winning lottery ticket when our rent was due.

Signs have more to do with how tapped in you are to your life experience. If you can slow down enough to notice things, you pick up signs. It's exactly the same as when you learn a new word and swear everyone is using it all of a sudden. They used it before, you just never stopped to note that word all those times. Trackers would tell you that there are creatures in the woods, but until they stopped and looked for signs through broken branches and paw prints, they are never really so aware of what is out there in the periphery.

So, signs are a way to help us assimilate a new reality. We look for them. We make connections. We try to make sense out of what does not make sense. We spiritualize and universalize and get a new and broader perception of the world and its meaning. It's like looking for God and finding Him in everything around you. If you want to find God, He is there in that tree, that child, that rain cloud. If you want to find your loved ones, there is evidence. It comes in signs.

If you find your experience had a lot of signs, pursue it. This is a type of psychic avenue. I had something happen to me when my sister passed away. It was a sign that told me it was time to put her to rest, but I ignored it as long as I could until it was time to stop and notice it.

My Own Experience With Signs
My sister, Tina, died in 2005. When she passed on, she and I had just been talking about my ghost hunting and desire to reach our family members we’d lost. We had even discussed haunting our childhood home (she had no idea she would die suddenly in a month's time).

I was still grieving the loss greatly when I went back to work (I worked from home) and was sitting at my computer where I always had e-mailed Tina several times a day. Sometimes, the most mundane things like, “I’m making tacos tonight,” “Alex just got an A on his final in geometry,” “It’s finally raining!” I felt like a limb was missing. I wanted to write her every time something happened.

I’d open my Hotmail account and stare at the screen. I realized then that it said in the corner whose birthday was coming up. It listed “Tina January 1st" as the only birthday and it was not even the right birthday. Her name was there in big blue letters, taunting me. I thought about removing her address from my contacts, but that would make her completely gone for me.

In fact, I left her on there for years, learning to ignore the sign that showed her wrong birthday.

Then, one time while cleaning up files and deleting things I'd kept too long, I finally went in and removed her from the list of contacts.

I went on the next day and she was still listed as a birthday on the fictitious January first. In fact, her email was still there along with a pop up message box with “Send Tina a quick message.” I shook my head. I’m too logical to believe my sister was putting herself back into my contact list over and over again and begging for a message.

I removed her address again. Still, the next day she popped up. To test it, I removed someone else from my list. That person remained off the list. Tina, however, continued to pop up with the request to message her.

I couldn’t resist. I went into the box that said “send Tina a message” and wrote “Are you there?”

Are you getting shivers now? Well, the shivers aren’t necessary--yet.

I got a message back from her husband who couldn’t get rid of her email address and used it himself now. He hadn’t communicated since her death. She was the one who did all the letter writing and communications for the family and he wasn’t the writing type. He updated me on my nephews and then told me, “Did you write because it’s the anniversary of her death? We're all thinking of her too today.”

I was shocked. She had died so suddenly during the holiday time that I didn’t actually mark the date in my mind. I was so confused, I could barely think straight. I just knew it was between Thanksgiving and Christmas some time, unsure if it was November or December.

Sounds kind of coincidental, until you consider this: When I got his return message, I wrote him back and then proceeded to remove her again from the contact list. This time, she remained gone.

When you love someone, you really do become a part of them. You become spiritually intertwined. If you’ve lost someone important you probably remember driving around on the road and seeing people rushing to jobs and daily routines and feeling strangely removed and other-dimensional as if time stood still for you. That strange disconnect is important to taking on a big shock and a new reality, but another part of that could very well be that a fraction of your spirit intertwined with theirs in the spirit world. The more time away from the person, the more break between your spirits. It also explains why it's usually in the first days or week of a person's passing that you are "visited" by them when you still have powerful spiritual connections.

You might ask, "but why couldn't you erase your sister from your Hotmail unless she had a hand in it?" Truth be told, I went back and studied what I'd done in the process of removing her from the file and I hadn't verified taking her off. In my subconscious or perhaps my ties to her psychically, I had not confirmed removing her from the list...until I was ready to. The same said for contacting her husband on the anniversary of her death. It didn't escape my mind that it was that time of the year, but in search of signs that coincidence had more meaning and on a subconscious level, I might have emailed on that date, having no conscious recollection it was the anniversary.