Sex and the Single Ghost Hunter: Kiss and Tell! 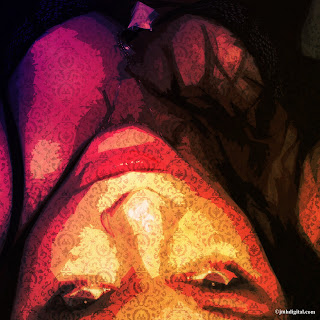 (art above by Jeremy--a great artist and, no, I haven't kissed him! Jeez!)

I haven't done an entry in this "sex and a single ghost hunter" in a while. I figured it was time to finally write one about something I daydream about every single day.

I kissed my first boy in first grade, David Love. My older sister threatened to tell mom, so I threatened I'd tell mom where she hid her Marlboro's.

The sassy auburn gal showed herself even then.

Males have intrigued me since I was a little girl. I had a crazy relationship with them. I was a tomboy, so they'd hang with me, but I was also attracted to them, so I wanted to beat the shit out of them in tennis and basketball and kiss the breath out of them at the same time. Any physical contact in sports was welcome. They even smelled good when they sweat.

As we reached adolescence, they would wonder what kissing was about. Oh yes, I had to try kissing the boys I grew up with, so D, D, D, and B all got a chance to learn on their tomboy friend. Lots of fun, but closed-mouth kissing at that juncture.

Teens were made for kissing because many were not quite ready for the big "dive" into total adulthood with sex. So, hours could be spent in lengthy kissing sessions, probably leaving the boys with blue balls and us girls weak and barely able to cool it down before clothes went flying. Depending on how good the kisser was, he could get a girl's thighs to fly open easily.

And kisses are the best way to know a man. I've found a direct correlation between the way a man kisses and the way he makes love including the degree by which he attends to the task, the time he gives it, the tightness or looseness of the kiss, and the ability to be creative and novel. His cadence, his ability to relinquish some power and dynamics come into play, as do sometimes his distraction, short attention span, and desire to end it quickly which can be quite telling, as well.

Middle-aged women will tell you that not kissing them enough is almost always the sign that the marriage is going bye-bye. One friend in a marriage that was dying of affection, met a man in a bar and sat in her car, kissing him for an hour. She told me in great detail about what it was like and I wasn't shocked this woman, who was married the same length of time I was, had gone out and kissed some stranger from a bar. Instead, my gut clenched with something I almost never feel in relation to others--complete and utter envy. You see, men don't have to make out with their woman once they have them, but new men do have to go through that kissing and making out period with the woman. In an ideal world, a woman would pick a new man every 1 year around the time when teasing it out of her is gone. In fact, I had spent a good couple decades begging my ex to kiss me and he hated the practice. Well, he's an ex now.

So, to all the men out there who think they're fantastic lovers, just remember, they're only as good a lover as a kisser.

**Tomorrow Syfy is having a cool giveaway on here**