GIVEAWAY! "Ghost Hunters" Credit Where Credit is Due 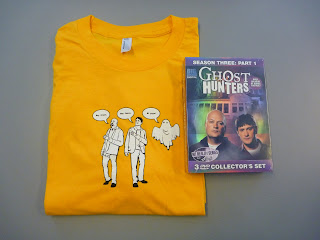 
Tonight begins a new season of GH on Syfy Channel. Hey, BTW, I really like the commercial with J&G walking down the street and looking up at the funky house. Very nice, guys!

I do ridicule the concept of research teams on television--research is not entertainment, but there have been some very good points to having GH on the air for so many years and they have had some very wicked cool moments, so I plan to honor that today.

When GH started, I was hunting and I laughed at the concept of someone wanting to watch ghost hunting. It's a bit like watching grass grow. However, TAPS did 3 very cool things for the industry by airing this show:

1. No longer did ghost hunters feel the need to be hush-hush about why they went to work groggy the next day. Ghost hunting was a legitimate interest and even kind of "cool."

2. They made it possible for the average Joe at home to see creepy places, sit in the dark, see what it's like to have something unexplained occur and how it baffles the mind and makes us hunters possessed to experience it again and again and again.

3. They also, thankfully, made "debunking" a household word. Not many teams would go out and assume it's explainable and then decide they're baffled. Most would go out expecting phenomena and they'll find it, even if it actually is a board squeaking outside the window or a rattling pipe.

With the new season kicking off tonight, Syfy is offering through my blog, a giveaway of a GH t-shirt and season 3 on DVD. If you want recall what was kick-ass about season 3, let me list my favorite moments that to me struck a chord in the ghost hunting world as quite typical of hauntings:

Birdcage Theater, Tombstone AZ: When we were there, we got some good EVPs, some atmospheric changes, lots of noises and disembodied voices. When TAPS was there, they saw the infamous lady in white descending the stairs, also heard footsteps and other sounds, had a cord jump from a bell it was wrapped atop of, and got some awesome EVPs. That building is seriously disturbed and it sounds like they hit it on a very good night.

Copper Queen Hotel in Bisbee, AZ: The pulling of the bedspread on top of Grant's feet as he slept it a really common feature. In fact, in a hotel in Prescott, AZ, I had something tuck my sheets back under the mattress for me, making me wake up to the frantic feeling of being pinned to the bed.

The Stanley Hotel, Estes Park, CO: Although I think the glass breaking was a natural event, Jason's closet making a ruckus and door opening and closing was a very common type of haunting feature.

Ireland, Attack of the Irish Elemental: This episode was seriously awesome. I liked the confirmation between the team about the shimmering face trying to appear and reappear and Dustin taking a dive was pretty interesting. The way he described it and the way he felt was very much like a sort of impact encounter. Some people see these things as evil and harmful, but truth be told, they usually have the features of something rushing at or through a person and with enough force to knock them out or throw them back, but there's no reason to think something wanted to kick their ass, only that there was a fantastic force that occurred an the person was just in the right place at the wrong time. As well the footsteps were very clearly caught and very much like the ones I heard as a kid in the Civil War hospital where I was raised.

Manson Murders CA: I was intrigued at the time with the KII use, but have learned since using it that air conditioners going on can trigger it and it will go on and off so long as the unit is running, so I'm not sure what they were talking to, but they did get some sweet EVPs!

Waverly Hills Sanatorium, KY: I'm think, if I recall right, this was on the one where both G&J saw a figure that looked to be in scrubs tuck down and get sucked out of the room. That kind of weird flashing image and strange movement is common with apparitions.

GIVEAWAY: Syfy is giving away to one of my followers a t-shirt and season 3 on DVD of "Ghost Hunters." As usually, good old Dale the Doll will be drawing a name from the basket. So, comment below and be a follower. Leave your comment by midnight EST tonight and tomorrow at noon EST, Dale will pull a name and announce the winner. Thanks Syfy for remembering your viewers are devoted fans! American Citizens only (Syfy rules)