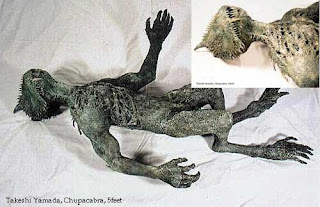 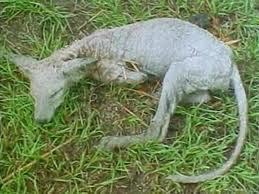 Wikipedia: The chupacabras[1] (Spanish pronunciation: [tʃupaˈkaβɾas], from chupar "to suck" and cabra "goat", literally "goat sucker") is a legendary cryptid rumored to inhabit parts of the Americas. It is associated more recently with sightings of an allegedly unknown animal in Puerto Rico (where these sightings were first reported), Mexico, and the United States, especially in the latter's Latin American communities.[2] The name comes from the animal's reported habit of attacking and drinking the blood of livestock, especially goats.

Physical descriptions of the creature vary. Eyewitness sightings have been claimed as early as 1995 in Puerto Rico, and have since been reported as far north as Maine, and as far south as Chile, and even being spotted outside the Americas in countries like Russia and The Philippines. It is supposedly a heavy creature, the size of a small bear, with a row of spines reaching from the neck to the base of the tail.

Biologists and wildlife management officials view the chupacabras as a contemporary legend. 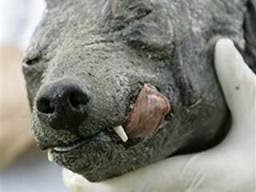 The "traditional" Puerto Rican Chuppies were bad-ass. Described as a demon with wings, red eyes, sharp teeth, drinking blood, his description changed to a more canine-like creature here in America.

Here's a cool article about the Puerto Rican version. 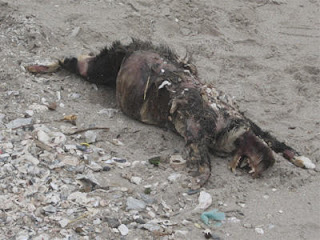 So far, encounters in Texas and the Southwest with these creatures (when they're alive) have not been at all angry or threatening. Not like the reports one hears in Puerto Rico where livestock are found dead and drained of blood.

Mange in coyotes and dogs, as well as foxes are the explanation for chuppie sightings. 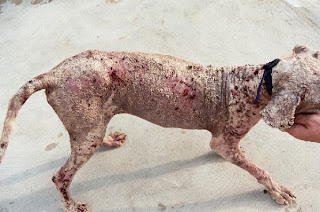 Mange: Tiny mites that burrowing the hair follicles of animals and resulting in hair loss. This is spread by animals. In areas where there is livestock and domestic dogs as well as wild canines like coyotes intermixing, the spread of the disease can be rampant. These animals that have been caught, especially the ones commonly found in Texas, seem to be very real animals with cases of mange. It might even be possible to backtrack and find outbreaks of mange on farms to determine where the origins of some of these creatures are. It would seem from recent reports mostly coming from Texas, that a simple check of the rates of mange in domestic pets and livestock would support the mange explanation. I find it very telling that so many are coming from Texas which says to me that this could very well be an outbreak of the mite there.