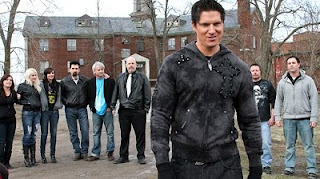 The show puts together two teams that are pitted against each other to get "evidence" of a haunting in a famously haunted location.

I won't even comment on how lame and boring it was or how funny it is to hear Zak try to speak like a grownup and act like he knows what he's talking about.

I hated the show. In fact, like the godawful "Haunted Collector," you will not hear me review or plug the show again.

If someone sent me in to salvage the show (the only way I'd ever see it again), I would tell them--you're doing it all wrong!

Here's some things that could perhaps revive the show:

Set up something that will make a shadow or a phantom sound and see which team debunks it.

Set a team of psychics against a team of traditional ghost hunters and see if there's any advantage.

Let the teams bring their own tools and use their own techniques. It could be more fun to see them trying out some crazy shit and having some strange methods.

I don't know what to say, Zak, except just go back to being the ghost tormentor that we enjoy chuckling at. Go ahead, get all hyped up and scream like a girl. Be sure and say the wrong things. Work that mop on your head into some gelled gem. Just, please, do not think of syndicating. Make your extra bucks promoting t-shirts and making people pay to hunt with you around the country. Give up on having an original thought. It's this thing called the Peter Principle. Check it out some time. Oh, hell, I'm not sure you understand research (the incubus incident and all), so let me tell you, "In a hierarchy every employee tends to rise to his level of incompetence."