New Point-Comfort: A Southern Tale of Haunting Part 2 of 3 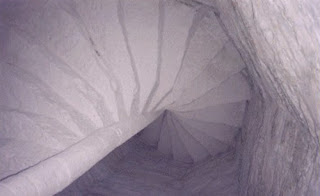 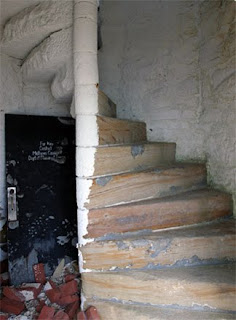 The New Point-Comfort Lighthouse. It was a favorite sneaky getaway. Whenever we could hijack someone with a motorboat to ride us, we kids loved this place. The lighthouse was abandoned at the time, just sitting atop a rock island in sad and sorry state, but still a magical retreat!

One time, my brother and I sneaked away to it. We climbed the steep stairs with no railing. We'd put a hand on the wall to guide us as we climbed up, our eyes turned skyward in wonder of the more narrow passage as we got near the top. I remember as a kid, sitting there at the top, my brother playing lookout for pirate ships, when I would hear the heavy steady footfalls up the stairway. It almost reminded me of the footsteps at Aspen Grove, but the boots were different, not hard on the bottom, perhaps rubber soled and the steps were taken in a steady cadence, without missing a step. It took some time for the sounds to come up the winding stairway, but they would always end before coming to my perch at the top steps. Many times, I raced down to see who it was. There was no one. The tiny rock pile of an island was all ours.

More than a few times, I heard a man chuckling in the entryway, a slow faintly amused sound. The smell of pipe smoke would waft by in that area, but not anywhere else in the lighthouse.

I never felt threatened. He seemed to be a caretaker of sorts. I later asked my brother if he thought the lighthouse was unusual and he snorted with laughter. "What? You mean the footsteps and the man laughing? Oh, and the pipe smoke and the shadows?" I remember shivering when he mentioned that. I hadn't seen any strange shadows. He told me that when we climbed the stairs, he could see a shadow up above as if someone were pacing in the light's turret. 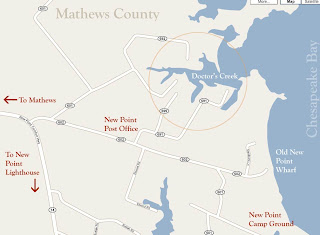 Well, one more ghostly story of the summer home for tomorrow's post and my unusual and charming childhood has been told.

**Get ready, every Friday I'm posting "Candlelight Tales," videos done by candlelight with wine in which I tell you in under 5 minutes a spooky story from my life.**