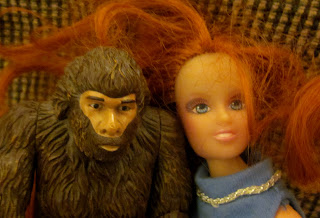 "That's a squatch!" The new buzzword. I must take it to my ghost hunts and freak out my partners. If I say it just right, maybe follow it with a mock Bigfoot call, I might raise the dead, huh?

Last night's episode of "Finding Bigfoot" was in my favorite state in the Union--Oregon! If there is nirvana, it is Oregon! It has it has it all, it's magnificent every inch of it, the people are artists, open-minded, organic, intelligent, and real. I need to quit trying to sell the state or everyone will rush there and ruin the beautiful countryside and beaches. One creature, however, is brilliant in choosing it for his home--Bigfoot. Oh, another brilliant creature, Cliff, calls it home, as well. Hey, Cliff, shopping for a Bigfoot hunting girlfriend??? 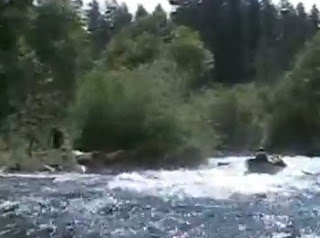 McKenzie River footage captured what might be Sasquatch on the shores of the river or perhaps a fisherman? That is what the team went to figure out. They found the environment to be suitable and even took a raft down the river to recreate the scenario. They tried to compare BoBo (their BF stand-in) with the same filming scenario. They figured the BF was probably around 6 to 6-1/2 feet tall. Matt (sigh) tweaked everything to be a Bigfoot no matter what is found. He will NEVER say something probably wasn't or accept evidence. Ranae thinks it's a person. It was fairly interesting simply by the coloration which was completely black as compared to BoBo and his tan coat, but then this team was there in a cold, wintry time of the year and the men who filmed it were there in the late spring/early summertime. Lighting could differ.

The team went out at nighttime. Cliff contemplates what sounds BF might like in primal calls. I have to smile. God, I love my dorks! Y'all know how much I have crushes on the nerds. I wonder if he makes BF sounds in the throes of passion? I think it'd actually make me curl my toes!

They went to another town to a meeting to find out what locals are saying about BF. This "Bigfoot and Beer" get together is yet another reason why I fucking love Oregon! Jeez! I really need to live there. They are my peeps. This is like a Bigfoot Anonymous meeting but with frothy cold beers and bar pub talk of encounters.

They had witnesses mark on the map where the sightings were. They narrowed down the region they needed to focus on. I appreciate that the team interviews groups, narrows down the best witness descriptions and then go to those locations. They may be overly enthusiastic about BF being everywhere, but I am so thankful for Ranae. Her instincts about witnesses and things that don't jive keeps it all down to earth. I so appreciate having her counterbalance with the team of male hormones pumped up on the hunt. Her doubts about one of the witnesses were brilliant and clear. One witness: Not credible. Now, two male fishermen who got a casted footprint were interviewed by Cliff and BoBo. They determine there were two Bigfoots involved in that account, one upriver screaming, another across the river with glowing eyes.

Now, they talk to some men who decided to use a bunny and some glowsticks to lure a Bigfoot. I love Ranae when she says she isn't sure about this story, some men with glowsticks, a live bunny in a cage and probably sitting back and having some beers. Not a good scenario. The men describe a huge hand in front of the cage, blocking it out with its size. The guys decide to try out the glowsticks and a bunny in a cage scenario. They do wood knocks and howls and look for heat signatures. They see the glowsticks under the bunny cage move. Yeah, well, the bunny is no doubt moving around in there. They get some tree knocks and decide to come back the next day.

The next day, they plan to blast some recorded BF sounds loudly up above where it will resonate below. They use electric motorcycles to approach the sound of a responding BF. BoBo and Ranae take the bikes and go out with a parabolic dish to listen for BF and hopefully sneak up on him. They appear to hear a sound "That's a Squatch!" (Hint: I would really like a t-shirt that says that if anyone is ambitious enough to make one!) The howls are pretty impressive. I got a shiver of delight. There's something so Blair Witch about them tromping around in the darkness. I'm not sure why they didn't get a sample of the supposedly fresh urine which might have had epithelial cells (skin) and DNA, but they didn't.

Y'all know I'm going to have to put in a comment of my own. I'd like to see Matt dropped from the team, he's fucking useless, but I would like to see them replace him with a professional tracker and woodsman. I think that would be an ideal scenario. Well, ideal would be that they add a brassy redhead who is a huge BF fan to the team, but alas that is not likely to happen. So, my second choice is Mr. Jeremiah Johnson type tracking professional. Hell, if he looks a little like Jeremiah too, I wouldn't complain!

I'm hooked. I love BF so much, I'll watch anyone hunt him. My favorite thing to do on a day off? Watch back-to-back BF documentaries. God, I love this critter and his home! The average person is just as uncomfortable in the woods as a haunted house, so I suspect this BF show will be picked up another season. I hope they shuffle out Matt and make Cliff the team leader, but other than that, I'm not going anywhere and you can expect a weekly review when the season is on and they really should give it more like 8-10 episodes instead of what I heard was a measly 6.

Next week's episode looks wicked awesome atop a snowy mountain. I can hardly wait! I will darken the room and get in the mood. Yeah, I know, I'm kinky!