The Beasts of Gevaudan 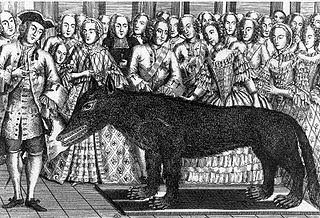 I love werewolf stories, but the best is always the original...

In the mid 1700s in the province of Gevaudan in France, huge reddish colored, horrible-smelling wolf creatures began attacking and killing the citizens, tearing open their throats and thus started a massive scare amongst the people. Over 200 people died.

This strange pack was described by witnesses as something most unusual from your run of the mill wolves with a female in the pack who did not participate in the attacks and partial eating of human beings. This case not only helped spawn the concept of werewolves but has piqued the interested of cryptozoologists from the accounts made by people who often saw wolves and should know them when they see them. It was speculated the beast was a hybrid of a mastiff and a wolf given its unusual size and color. Some of these beasts were killed and found to be very large and unusual.

The legend of the silver bullet came from the second beast killed (Wikipedia) The killing of the creature that eventually marked the end of the attacks is credited to a local hunter, Jean Chastel, at the Sogne d'Auvers on 19 June 1767. Later novelists (Chevalley, 1936) introduced the idea that Chastel shot it with a blessed silver bullet of his own manufacture. Upon being opened, the animal's stomach was shown to contain human remains. Controversy surrounds Chastel's account of his success. Family tradition claimed that, when part of a large hunting party, he sat down to read the Bible and pray. During one of the prayers the creature came into sight, staring at Chastel, who finished his prayer before shooting the beast. This would have been aberrant behavior for the beast, as it would usually attack on sight. Some believe this is proof Chastel participated with the beast, or even that he had trained it. However, the story of the prayer may simply have been invented out of religious or romantic motives.

What was your favorite werewolf movie? I think for the storyline, I liked "Wolf" with Jack Nicholson, but for the beauty and cinematography, the new remake of "The Wolfman"