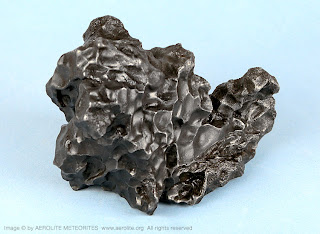 A meteorite is a piece of iron, stone, or stony-iron composite that has fallen to Earth from outer space. Most meteorites originated within the Asteroid Belt between Mars and Jupiter, and were once part of a planet or large asteroid. A few meteorites come from the Moon and Mars, and a few others may possibly be fragments of cometary material.

Meteorites are attracted to magnets. Meteorites contain a great deal of extraterrestrial iron, even the ones that look like terrestrial rocks (stony meteorites). Just like a common nail or ball bearing, they will easily stick to a magnet, but they are not magnetic. Test your find with a good hardware store magnet, or a rare earth magnet. Very few are not attracted to magnets.

Meteorites are heavy. Most meteorites are much denser than ordinary Earth rocks. The thing most people say when they hold a meteorite for the first time is, "Wow! It's so heavy!" The unusual weight is due to high iron content.

From this site's advice:
# "Strewn Fields" This is the footprint of an impact. Several worldwide strewn fields are shown in the Norton book, some in the U.S. These have been searched by others, but there is undoubtedly material that has not yet been found.
# Deserts--The desert is devoid of ground-covering plant life, and infrequent rain. It is a good region for hunters, as meteorites will not weather and erode as fast, and are right on the surface. Sand dunes are especially good.
# Craters Again, known craters are shown in Norton's book. Be careful here-Meteor Crater in Arizona, once the source of thousands of specimens, is now closed to meteorite hunters. You can be arrested and fined. You should always check if the area is on private property, and get permission before entering. This is especially true overseas.

Use a metal detector or use a strong magnet to test the rock.

Recently fallen meteorites will exhibit fusion crust. This is a thin black rind, sometimes shiny, sometimes matte black, which is acquired during burning in the atmosphere. A freshly fallen stone meteorite will look much like a charcoal briquette.

To learn more about their worth, check here.

I am planning to do some meteorite hunting and some gold panning this year when the weather is better (which for us isn't until late October), but you can expect me to share my finds and adventures, as always and I hope you share yours!