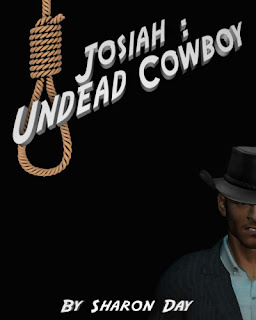 I kicked off my western horror novella series "Midnight Arroyo" on Kindle and Nook. Luckily, on Kindle they can be downloaded to your PC or IPAD or droid devices.

"Josiah Undead Cowboy" is about a cowboy in the early 1900s in Arizona Territory who is thrust into some unusual circumstances, making him the eternal guardian of a ghost town and the vampires within the mines. It involves Native American legends, gold, and magic. The series will be covering the horror classics with a strange western twist including gold and an arroyo (wash) that runs through all the towns of the series, tying it all together in a strange and undead way. It's only 99 cents and you can't go wrong. Right now, I'm working on the second in the series, "Sheriff Kai: Zombie Outlaw Killer."