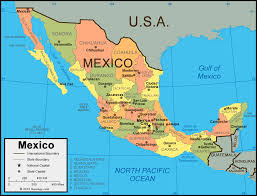 I just cannot freaking give this subject up. Something about Mexico calls to me and it's not white sandy beaches, Margaritas or authentic cuisine, it's the freaking alien/UFO thing connection.

I am always stumbling across things from Mexico that make me feel like it's not just a bunch of separate events and situations, but is all connected.

Mexico's geology is awesome for weirdness. There really is a connection with the freakiest shit in the world and an ore-rich soil. Here's some things that put Mexico in my curiosity/theory radar scope:

Mass UFO sightings. The ones in Mexico are some of the best.

Flying Humanoids. These look like a humanoid hovering, flying as if it has a jet pack. They have been seen mostly over Mexico and the Southwest.

Dead alien carcass. Farmer kills a tiny alien by drowning it in an irrigation canal, taking hours for it to drown. It's body is studied by the team at Monsterquest. It's skeleton is like a lizard, its teeth do not have roots like a human, it's brain was huge, it had joints like a human.

Starchild Skull. This bizarre skull was found in Mexico in 1930. The misshappen skull was so deformed that it caused wonder. Studying it created a bigger puzzle, it wasn't just a deformed skull, it had no sinuses, the proportions were all wrong, the neck inserted in the wrong way, and the very material of the 900-year-old skull was strangely woven. DNA proved a human mother but some DNA that could not be correlated with any of the races of the earth.

Okay, my brain hurts. Theories anyone???