What We Learn in Ghost Hunting From Squirrel Wrangling 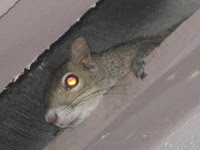 Y'all know me well enough to know that I'll get you from A to B safely, but the ride might be kind of wild. Don't close your eyes, though, cause you might miss some very important points of interest along the way and scenic views you never would have braved before.

So, what does squirrel wrangling teach us about ghost hunting?

Picture if you will, a squirrel gets into your house when the patio door is open. Other than running around screaming and opening every door and window, how do you get the little rodent out? You grab a sofa cushion and maybe start wrangling him towards the door. What does the little devil do then? He climbs atop your TV armoire. Okay, so you start nudging him down. Now that he's down, he darts off deeper into the house. What do you do next? You chase after him again, huh?

The squirrel could freaking do this all night long. He's not even working up a sweat like you're doing. In fact, he's probably laughing at your efforts!

Now the hunt is on!

Well they don't call it "ghost hunting" for nothing. How does a team go about tackling a house? Why, they go in teams of two or maybe the whole pack of them, combing from the front door into the rooms that have a lot of activity.

They go in, activity goes out. We could do this all night long, and we do!

So, what's a team to do if they concentrate themselves together and move as a group from room A to room B and manage to usher out the culprit?

There are a few ways to wrangle a squirrel. One, of course is to pique his curiosity and bring him to you. Something novel and unusual might do the trick. I release tension by having some small talk, laughter and revealing secrets about myself in a location. I chit chat, talk about the trials of everyday life and laugh and relax and something magical happens; I attract curious intelligence. You know that syndrome where if a captor knows his kidnap victim's name and life, he can't kill her? Well, it's kind of like that in ghost hunting. Once you've made yourself a real person, your threat is gone.

There's a window of time when a team first arrives, that it's very upsetting. Imagine for a moment that you're at home and someone comes in with a bunch of equipment and strange people and start taking over your space. Then, they start grilling you with questions.

Another variation of wrangling the squirrel is to put someone in each room, leaving one well covered room open and empty of the living. This is a target room. You're basically showing the squirrel (ghost) the only unoccupied space in which to retreat to.

We've heard J&G say it before, but it goes without saying, there is usually a hideout place in a home where few ever go that is a place to retreat. Look at the building as a family lives and moves about in it. What is the "safe room." Now, be sure to monitor it, but leave it without any people in there all evening.

There's a lot of ways to wrangle that squirrel, but remember, he's stressed and he's not going to make it easy. At some point, when you quit chasing him, he'll find that door or window, but he sure as hell won't do it when you're chasing him with a broom. At that point, he just wants to survive your flailing awkward movements.

Same goes for ghosts, chasing them with a video camera and voice recorder is hardly going to endear you. Even the spirit world hates paparazzi.

So, next time you're out ghost hunting, just consider yourself to be wrangling squirrels (or, if you're a parent, trying to give your 3-year-old antibiotic medicine).