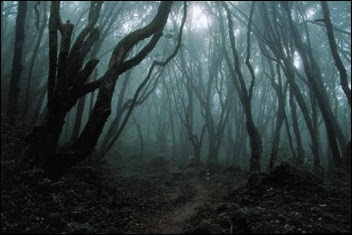 I am a huge proponent of a “Bigfoot Hunter” show. I believe that all of us city and suburban folk who would shiver and hide under our blankets while watching folks sitting in a dark camp at night, waiting for BF to show up and them running in a scattered chaos. Every branch snapping, every animal howling will make us startle and the hunters, no doubt, who are already on edge.

Movies have done a fair job of making the woods scary. Look at “Wizard of Oz” and “Princess Bride.” How about the wonderful 70s slasher woods movies involving Camp Crystal Lake and “Just Before Dawn”? How about those eco-angry films like “Day of the Animals” and “The Prophecy”? There are numerous Bigfoot tales and movies, as well as gems like “Cabin Fever” and “I Spit on Your Grave.”

Is it because it's not our territory but the animals? Is it because things are hidden from view even a few feet away from us? Is it because everything in the woods is a beast and therefore not reasoned with like fellow humans? Perhaps the woods represent the unknown. Whatever the reason for the fear of the forest, it is a common thing.

If you're ever attacked by a bear, it was almost surely in the forest. If someone killed you and wanted to hide the body, it was likely the forest they would choose. If you were to get lost and have your arm trapped by a boulder and be forced to cut it off with a pocketknife, the reporters would announce this occurred in the forest. If you fall down a rock face, are killed by an avalanche or are trapped by a raging fire, it was probably in the forest.

I have had a lot of scary things happen in the woods, but the one that haunts me the most was when I was camping up in the Sierras. We were up in the Sequoias. The most beautiful hike ever. We parked our van and the group climbed out and looked up at a park service board that showed pictures of what bears had done to cars and campsites. These were not pretty pictures. We then hiked a few thousand feet past beautiful huge redwoods and giant ferns into a magical forest. We set up camp for the night. We tied our food up in a tree so bears wouldn't come. I felt fairly good about that, but the nylon tent worried me. Then, someone laughingly said to me (I managed a clothing store and was a 1980s clothes hound and fashion freak) "I hope you aren't wearing mousse with a fruity scent in your hair. The bears will go to you first." I crammed myself and my peach-scented hair deep into the sleeping bag and shivered as I listened to every sound outside. I never slept. As the campfire still glowed and the folks sleeping in the open around it kept feeding it wood during the night, I could see the shadows against the tent. I waited for the shape of a bear, certain it would come. Then, I heard one of the men near the fire grumbling. "Oh, it's a bear. Damn! A bear. Why? Why me?" He kept mumbling about the bear and I held the flashlight in my hand ready to hit the bear and scooted to the center of the tent, quaking for my life. The bear never came, but the sunlight did. In the morning, one of the campers laughed at the man who was mumbling about a bear all night. "I had no idea you could talk in your sleep. I know what you were dreaming about." Weary, I sank down near the dying fire and glared at the man who smiled sheepishly.

So, what happened to you in the woods that unsettled you?