This is out on Netflix (above). Bless my Norwegian brothers who made this film! I'm so excited. I've waited my whole life for a movie about Trolls. My father told me as a child that trolls were used to frighten children into behaving. This movie looks like it might just frighten adults into--running! Looks like fun and I have yet to see a Scandinavian film I don't totally get!

Here's the premise according to IMDB: A group of students investigates a series of mysterious bear killings, but learns that there are much more dangerous things going on. They start to follow a mysterious hunter, learning that he is actually a troll hunter. 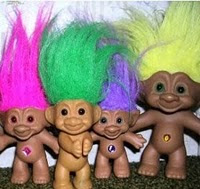 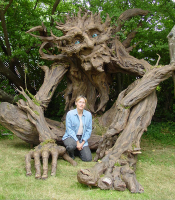 (above: Troll dolls. My favorite troll ever--a statue made by artist Kim Graham. A video of creepy disturbing trolls)

According to Wikipedia, a troll is a “member of a fearsome race of creatures from Norse mythology…human-like folk of the wilderness, living underground in hills, caves or mounds…A cunning and deceitful people, living in the woodlands or mountains. Trolls come in many different shapes and forms, and are generally not fair to behold, even though the female trollkonor, or sometimes even male trolls, could appear very attractive until a character spotted their tail. Trolls were often said to be able to change their appearance, and did so in order to trick humans into doing what they wanted. For example, a troll may present a beautiful appearance in order to trick a character into following them into their mountain home, then hold the character captive for year.”

I became obsessed with trolls from my father who came from Norway. He had a reverence when speaking about the mythical creatures. I also grew up in the time period of troll dolls. Admittedly, I didn’t like the bright happy colors. I wanted trolls to be something that should remain hidden beneath a bridge, lurking in the shadows, haunting the forest caves where they scare away other creatures. I’d love to see someone do a scary movie with trolls that is worthy of the dark creepy aspects of them instead of the gremlin-looking badly automated beings of past movies that make you giggle instead of cringe.


Novel:
“Lord of the Rings”

Contemporary: Online, a troll is someone who wanders from site to site leaving grumpy-pants negative messages. Obviously, a term referring to coming out from under his bridge to gobble up the passersby. Luckily, there are no trolls in my blog’s followers, must be a sign of luck.