Tonight, new season of "Ghost Hunters" (yawn) Did I mention "Ghost Hunters" is starting ANOTHER season tonight? At this point, I think some viewers wouldn't mind watching them pick lint from their bellybuttons. Personally, they showed no growth or change in all those, what is it--7 seasons??? I say "off with their heads!" It's not entertaining and it's not even informative anymore. It's like taking Algebra for the fifth time, all I hear from the teacher when he speaks is "wah wah wah wah wah." All I hear when Steve explains the haunting to Tango is "wah wah wah wah wah." And, at the end of the episode during reveal, Jason will say for the umpteenth time "and things of that nature." 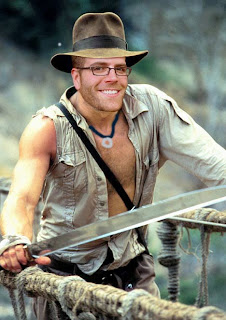 On the bright side, my favorite guilty pleasure, "Destination Truth" has a live episode kicking off its new season on the 17th of March looking for Banshees in Ireland--wahoo! God, I want his job! No, I'd rather be his sidekick. Expect me to launch the show with its own goofy show-day fun. You know how FoF I do the tank top shots and then LAUGH episodes? For GA I do music videos and the drinking game? Well, Josh baby needs his own showcase and I'm going to give it to him like only Autumnforest can when she's stalking, ahem, admiring someone. You'll have to see what I have planned on St. Patty's Day.

I hope you're watching "Face-Off" on Syfy Channel. I am addicted to it. I find myself rooting for certain participants. I really loved last week's when they were designing new horror movie villains. This week, they are going to do old-age makeup.

Syfy has announced a new show in conjunction with one of the most disliked Top Chef contestants who was rather young and cocky but a damn good cook! He was very much into the new technology of cooking using rather space-age appearing techniques. Here's what they have to say about this one--I like the idea and will be following it avidly:

"Marcel’s Quantum Kitchen."  The series, premiering March 22, follows Marcel as he dreams up creative menus and produces extraordinary events and celebrations for all types of occasions while having to use every ounce of imagination and scientific experimentation in order to deliver a once in a lifetime experience.

Syfy still needs me to orchestrate my brilliant paranormal show concept, but for now I will watch their other programs and amuse myself until they decide to get serious about their ratings.