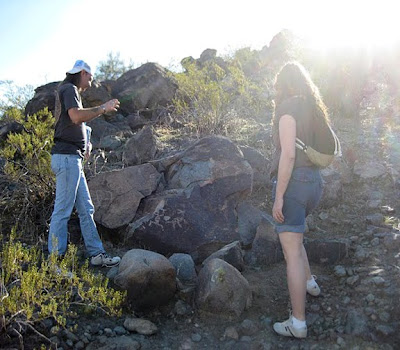 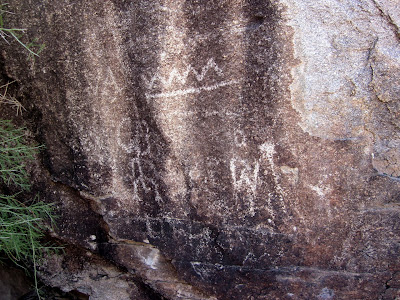 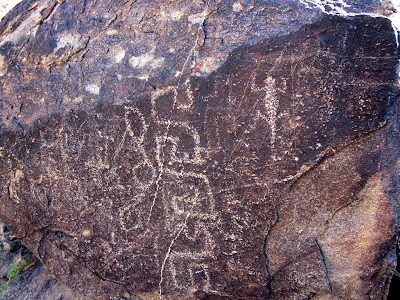 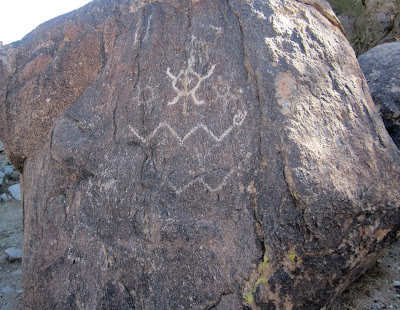 (Yesterday, I had the two weird shots taken of me on the hike on my post)

So, this weekend I went on a nice hearty hike with my buddy Vinnie, guided by Jeff Woolwine. He has become a big name locally in the UFO world, as he has filmed lots of UFOs, studied extensively the glyphs made by ancient tribe of HoHoKam, a tribe that went missing and unaccounted for.

It was a gorgeous day, crystal clear, mild, and the hike took us hugging the mountain range made famous with the Phoenix Lights event. South Mountain Park is known as the world's largest municipal park at 17,000 acres. Yes, it is freaking enormous!

Jeff began to take notice of the sky and photographing what he saw. He searched for answers. When he studied the glyphs in the mountain park and learned from a native expert, he realized there were ties to what was happening in the sky and what ancient men were carving into the granite.

I personally couldn't help noticing that the rock was granite everywhere with bits of quartz all around. In haunted locations, this rock combo is often considered ripe for haunted sites. The nooks inside the mountain with the jagged rock kept it cool and dark. There were even lichens growing on the rocks—in Phoenix!

There were huge peaks, many large pyramid shaped monster-sized hills. The ground was littered with ancient pottery shards. The overall feeling coming from the rock was very safe and protective. As I stood there looking into the distant Phoenix skyline, I realized this was an ideal place to live in Phoenix if you had no air-conditioning. Up at this elevation, you could see if anyone is coming at you. Tucked up in the rocks, you might never see sun all day long. The washes ran with water in more ancient times. You could see where the waterfalls slicked back the rock up above. There were plenty of javelina (wild pigs) and quail. It would have been the nicest home the Valley of the Sun in ancient times.

Jeff was an engaging host and guide. He was able to take us to numerous glyphs and point out the details. Some of them showed symbols of clockwise and counterclockwise pinwheels showing dimensional-like portals opening and closing from the visitors from the other world. He described them being able to come from the rock and shapeshift into man form. Standing there, studying the stones and their location and the surroundings, you could see them portraying circles in the sky that were not their sun symbol which had spokes. You could see man and creatures looking to these things. Sometimes, symbols like serpents showed the territory you were in. Some showed the peaks of the surrounding mountains. I was impressed that the portrayals in stone showed actual linear design, all animals and creatures on the ground, the mountains in the background and these circles spinning in the sky, in the sky above.

One particular glyph caught my eye. It was a long image of a man with his arms down instead of upward. It was the only drawing on the entire rock. It appeared to me to be a kind of grave marker.

All together, we must have looked at over a dozen glyph locations, easily. Each one took my breath away. In the setting of this giant granite playground. It was peaceful, dark, cool and serene. Strangely, for being in the middle of a giant park and the sound of distant coyotes, I saw no signs of animal life in this valley of glyphs.

The concept of UFOs being crafts from other worlds is lost on Jeff. He is of the belief from his extensive studies that the “gods” these ancients saw were of this earth/another dimension sort of scenario and wanted man to worship him and believe in his existence. The lack of worship and bloodletting in His name created the extinction of the HoHoKam tribe when they were taken away by these “gods.” The showing of the Phoenix Lights might just have been their attempt to keep our eyes on the skies and believing.

I'm a theories kind of gal and I'm excited when someone is thinking outside of the box and looking for correlations. I found Jeff to be refreshing and excited about a subject that baffles many. I went into this being safely skeptical and came out of it feeling spiritually moved. It takes a lot to get the spiritual in me ignited but I feel as if I just tapped into a place that was much more than a living room for an ancient tribe, but the site of something a bit more magical.