My Childhood Haunts: The Angry Poltergeist 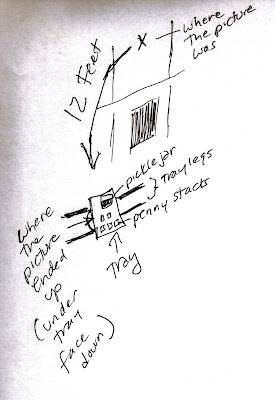 Every ghost hunter has a moment when they truly want to run in panic. Mine occurred at the age of 14 when we were preparing to move from our manor home to the big bad awful west--Arizona. I wasn't happy about the move. In fact, I tried to make ghostly sounds to scare away perspective buyers with no luck.

We'd boxed up our things to have them unpacked the next day. We had several plaster ceilings just simply dump onto the floor all at once. Disconcerting events, but not unheard of in that house. We had film crews there who watched the wallpaper peel off the walls as they walked by, so it wasn't off the charts. I had a high tolerance so I found it more or less amusing.

Then, one day when my father and brother were looking for a rental house in Arizona and the reality of the move became real, my mother, oldest sister, and myself were home alone. We sat in the breakfast room on one end of the house having lunch and discussing how we hoped they'd find a house with a pool since swimming pools in Northern Virginia were a rarity in private homes.

A huge crash sent us running through the house to the far side music room where what we saw made absolutely no sense and to this day gives me shivers. In fact, I was so hysterical that I was begging and crying to sleep in a hotel. The house didn't seem to want to let us move and I was taking it's cue after this incident. In all my years there, I never took incidents to be directed at me, but this was so violent and so unexplainable that I no longer felt safe there.

We had set up in the music room a TV tray. Those old-fashioned ones with the folding legs that clip into the tray. On top of it we had a pickle jar filled with pennies and paper rolls. We'd been stacking the pennies into stacks of 10 to put them in the rolls. Across the room, about 12 feet away, an oval painting of my mother's uncle in WWI costume was fastened to the chimney. Well, the picture with its glass cover was now underneath the folding tray face down and unbroken. The tray had come out of its clips which cannot happen without lifting it up and out of them, the legs splaying out, it had fallen atop the picture. On top of the tray, the stacks of 10 pennies were perfectly aligned. Not even slightly shifted from place. We studied it, shaking our heads and looking around us.

I slept in one of the carriage houses that night. I was too scared of the house. After that incident, more happened and escalated and the other haunting features of footsteps and voices were louder and more urgent than usual.

Still, I could handle things that were explainable like history repeating itself in sounds and smells, but I could not get my mind around how this picture flew across the room, knocking a tray up and out of its clips, ending up underneath it face down, the pennies still perfectly neatly stacked. I didn't know of any statistic that could explain that scenario ever occurring under any circumstance.

It was a turning point for me and one of the biggest influences in me later seriously pursuing more such encounters and finding explanations.

*It's my day off and I'm going to do something wild and insane that I've wanted to do ever since I was a kid, something my ex would never let me do, something that might change me forever...Details later and pics*