A Ghost In His House 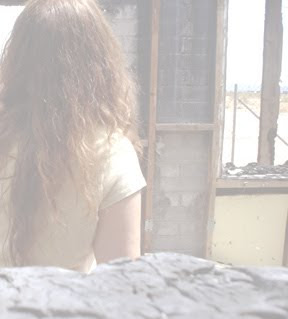 She walked the halls when he slept. Sometimes, he might hear her open a cabinet door. He would roll over in bed and mutter at the gall of an entity to disrupt his sleep.

When he awakened in the morning, there in the refrigerator was a packed lunch. He pulled it out and took it with him to work, not wondering what its origins were or why he had one every work-day morning, but he was pleased that he didn't have to stop and pack one himself. He had no idea how to construct so much as a sandwich.

He worked a long day, overly busy, overly stressed, waited in a long mile after mile of traffic, but when he came home, a hot healthy gourmet meal magically appeared at his place setting along with his vitamins laid out beside it. He did not question his good fortune or the fact that his favorite show was on the television. He enjoyed having the table to himself. There was no one to eat with. He hated conversation during meals.

Occasionally a shadow would pass him as he studied the TV screen and chewed. His plate swept from his spot where he sat and he looked around in horror until a plate of homemade cookies were placed in front of him. He watched his waistline, so only 3 cookies would appear, but they were just what he needed. He appreciated the magic of his home and never stopped to ask the origins of his good fortune.

Upon occasion, a succubus would come to him in the night, pleasure him and then recede to her other world. He was pleased for the physical release and lack of personal face to face time which he never was comfortable with.

Sometimes, the bed would shake and the sounds of a woman's sobs could be heard as if she were hugging the opposite side of his huge king bed and wounded right down to her soul. The man shook his head and went back to sleep, knowing that his schedule was full, his weekend was booked and he had nothing to keep him from all of his tasks ahead.

The family ooh'd and aw'd over all the wonderfully personal gifts they received, the spread of yummy foods on the table, the magical atmosphere and holiday decorations. The man pumped up with pride. Apparently, these gifts with his name on them were good. He hadn't checked to see what was inside the wrapping before giving them.

When he wanted to go and play, buy something new, fill the house up with his man toys, there was no one to say “no.” The man liked it. His house, however, appeared to be haunted. Upon occasion he would see shadows, hear sounds, catch a whiff of perfume, notice something had moved from its place. He would shake his head. He was too practical to believe in such things. Besides, so long as you didn't believe in it, you would not see it.

Late at night, the ghostly wraith would wander the halls, stand at a window, gazing longingly into the night sky, dreaming the man would see her, that she would finally exist for someone, that he would light up when he saw her and miss her when she was gone. Try as much as she did to be visible, the signs that she existed were becoming weaker and weaker as time went on. Now, he barely stopped to wonder if she was in the same room as him. Her powers were waning and it would not be long before her haunting time was over.

In case you're wondering, yes, this is autobiographical.

***Don't forget tonight is Lonely on a Friday night on here. I will be "haunting" the blog all evening if you want to chit chat.***