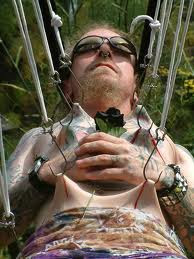 (I'm taking a hike tour of South Mountain (the mountain range the Phoenix Lights occurred at and where I live) We're going to be shown ancient Indian petroglyphs that supposedly portray how UFOs visited here long ago. As well, I'm dragging my buddy, Vinnie, to get his aura photo taken and mine too. I should have plenty of interesting video/photos/stories to share).

What do you know about your neighbors? Perhaps not as much as you think. There are so many alternate lifestyles that people enjoy on the side that it makes one wonder, what is normal nowadays?

Swingers: Everyone knows of swingers lifestyle. You're sick of looking at the same face (or other body part) during sex and you want something new. You want that zip you first feel when you're with someone new and you don't know what their touch and technique will be like. It's not terribly shocking nowadays and, in fact, can happen at a really wild party or when couples rent a cabin and enjoy a jacuzzi after a few mojitos. It's about as experimental as two teen girls on a dance floor exchanging saliva and testing the waters.

Perhaps we should turn up the lifestyle edginess button a bit. How about...

LARPers: Live-action role-playing done in parks and fields around the country in full garb and makeup, acting out like dungeons and dragons lots of scenarios in a sort of mock medieval geek fest. There are different levels of LARPers from those who put it on for the weekend fun and others who live it daily and then go online and play World of Warcraft. Their close kin are the “Cosplay” folks (costume play) and some of whom decide to costume themselves based on things like super heroes, cartoons, anime and manga. (I'm sorry, I just giggled).

Okay, so weekend costumers in the park don't shock you? Let's go a bit further...

Vampires: Yes, there are people who want so much to be vampires that they not only live the nocturnal lifestyle and the desire for blood, but even sleep in coffins and shun the sun at all costs. It reminds me of when I was a kid and I thought that if I did my bedroom up like the inside of Jeannie's bottle on “I Dream of Jeannie” and wore the costume and blinked with my arms crossed, I'd somehow become her. We usually outgrow this some time (between fifth and sixth grade, I believe).

Okay, so blood sucking nocturnal dwellers are not giving you shivers. Perhaps we need to take you to a more hardcore alternative lifestyle.

Fetish/BDSM: Bondage, discipline, domination, submission, sadism and masochism. This is pretty obvious to most of us. Yes, those happy people who want some role playing on a more hardcore level including lots of pain combined with pleasure and playing out scenarios. Imagine playing “doctors” but on a seedy adult side instead of curious children. It goes further than this, however. This also includes those who enjoy human suspension. You're not quite sure what that is? Sounds horrible? The ones who don't get enough out of leather straps and whips, enjoy sticking hooks into their skin and hanging from it as some kind of ultimate test.

What do we get out of all of this, besides that our neighbors may be into poking anything that moves and perhaps even in a costume with a name like “Lord Gyro” and a whip in hand?

Perhaps pornography easily available online (instead of blushingly bought by only the brave at 7-11's), role-playing online games, television and movies showing people with glamorous and interesting lives has given us poor folks a feeling of mediocre lives and boring existences in which we work, eat, sleep, work, eat, sleep. Instead of being Harry in Cleveland working as an insurance agent by day, that man can design a character on WoW who is strong, brave and ballsy. Perhaps he can flirt with a secretary in Memphis and begin a little sexting dialogue. He could even escape in his mind to being a medieval blacksmith in a weekend game in the park.

Honestly, I was always bucking the trends when I was younger, so am I not running around enjoying such crazy lifestyles? Perhaps because of this one last horrifying alternative lifestyle that has me wondering about the whole genre...

Furries: Anthropomorphic characters that are part animal/part human. They wear costumes and makeup, ears, tails, and sometimes want to take it to more permanent levels. These people don't just dress up like animal creatures and are attracted to other animal creatures, the ones who take it to a hardcore level are into body modifications to actually become a creature as much as possible. 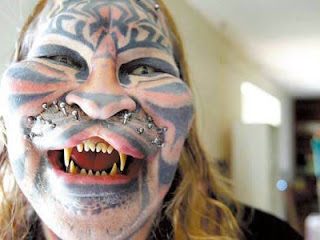 Okay, now I did something I strive to do on my blog—terrify you from time to time and leave you unsettled.