Dolls, Clowns and Mannequins, Oh My! 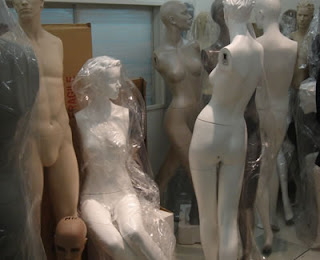 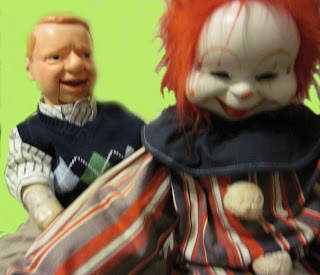 What is with the common fear of dolls (both baby and ventriloquist), clowns and mannequins?

My acquisition of both Dale the ventriloquist doll and Skittles the clown doll were to try to unsettle myself and perhaps manage to get over my distaste for these toys. As well, I plan to add a mannequin to my list of acquisitions. Those 1950s female ones that look like June Cleaver most unsettle me.

Human facsimiles are unsettling. We feel the same way about robots that are too human-like. Ventriloquist dolls with their hinged mouths and ability to "talk," are unnatural. Clowns are people in costumes and makeup that look human-like but their expressions are exaggerated in a disturbing manner. Mannequins look nearly identical but stand stiff and stuck in one position. There is a lack of soul to these effigies that gives them a sinister feel.

Have you ever seen a dog react to a stuffed dog? Yeah, humans do the same with these dolls. They approach with apprehension, study it, shake their heads and back off.

Want to get more frightened? Try these movies:
"Clownhouse" Victor Salva made this film rather infamous by having pedophilic encounters with one of the actors. It still remains to me more disturbing than "It." This one has three brothers alone at home and a clown that torments them.

"Dead Silence" This is one of my favs of all time. It's atmospheric, creepy, and includes tons of ventriloquist dolls and even some mannequins thrown in for good measure. The music alone is creepy and the dolls are horrifying.

"Tourist Trap" This is for those who love 80s slasher films and fear mannequins. Are the mannequins in this off the beaten path museum really coming to life? You begin to wonder if you're losing it when the actors appear to be losing it.

"Fear of Clowns" An artist is being stalked by a clown that looks like the one she painted and she has a fear of clowns!

"Trilogy of Terror" That little Zuni hunting doll goes down in history as being the creepiest idol to stab someone.

"Magic" Anthony Hopkins did a brilliant job as a head case ventriloquist who has an unnatural belief that his doll is alive.

"Poltergeist" Single scariest kid versus doll encounter when the boy is pulled under the bed by his clown doll.

"Dolls" People stopping into a mansion where doll makers have a haunted collection of dolls.

So, if you had to be stuck in a dark room all night with one of these, which would be worst?

And, what makes you so frightened of them?