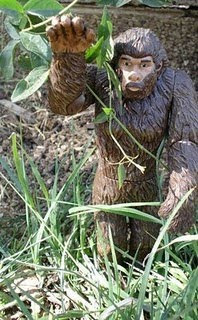 (photo above; hopefully the only way we'll ever capture Bigfoot--as a plastic doll)

Sure, I hunt ghosts, but I also have a fascination for Bigfoot. I haven’t had a personal encounter with him like I have with ghost phenomenon, but still for some weird unexplainable reason, I have always believed he is out there. It’s a strange feeling, as if I’ve been separated from a twin at birth. I sense he exists, I feel as if my life is being paralleled, and I also know that when I come face-to-face with him, my world will change and I’ll have a sudden sense of peace, as if everyone is accounted for in my family tree.

People often say, “if Bigfoot is out there, we should be seeing him, seeing his bones, seeing his hiding places.” I don’t know about them, but I’ve lived in the desert Southwest since 1977 and I’ve tried desperately to see a javelina without success. I guess I could say that until I see one, they don’t exist. It’s kind of like ghosts, until you encounter the unexplained, it doesn’t exist. I suppose Bigfoot skeptics will have to be faced with his hairy butt in some thick forest before they’ll say what others who’ve come across him have said, “what the hell was that?”

What would keep such a population alive so long would surely be a social grouping. Look at apes and chimps, they have an extended family they live amongst. They breed within the group, they live within the group, they forage for food within the group. Bigfoot cannot be a loner and breed. He must have his own suburbia. I think it would be against his very nature as a primate not to. I also think that, like the Great Ape, he would know how to hide up in the hillside for as long as possible before being found. Some locals might report such a hairy creature for centuries before someone stumbles upon his family’s hideout. Apparently, Bigfoot is still in the legend status as the Great Ape once was. We no longer deny the Great Ape because the locals told stories of him without proof of his existence. This is simply a matter of time and tenacity until we get the real in-the-flesh proof that science and humanity demand.

I personally don’t want to see Bigfoot’s future go the way of the Great Ape. I’m not paying admission to a zoo to see him pacing a big iron cage and being taunted by teens in baggy pants tossing popcorn at him.

My advice, my big cousin, is to continue to find those reaches in the Washington State Mountains and Oregon hillsides where you’ll best protect your family. Don’t do anything stupid one night like eat too many psychedelic mushrooms and stumble onto a roadway to be plowed down by a family’s SUV. Whatever you’re doing, keep it up. Don’t be found. Don’t prove yourself to the satisfaction of us who have always believed in you.

In the long run, prove you’re equally as smart as man because you know what capture means. Hide your furry butt someone where the sun don’t shine and stay icy. Leave only enough evidence to scare off the weak-willed and remind those who believe that their brother is still in the woods.

But, whatever you do, please remain an intriguing legend.

p.s. Thanks for the Patterson-Gimlin home movies, bro, it’s the only way I have to remember you.