What Would You Do? The Haunted Closet 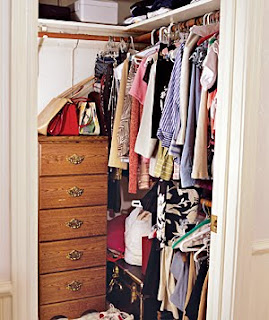 I've been doing this blog for over 3 years now and one thing I've learned is that everyone who reads this really has a good angle on ghost hunting and hauntings in general. This is the beginning of a new series "What Would You Do?" in which I give you a hypothetical situation for a ghost hunt and you tell me how you'd approach it.

The home is a 30 years old. It's been lived in by two families. One lived there for 27 of those years. A nice family with a blue-collar working father, a mother who stayed home and two perfectly healthy and happy children. Nothing unusual occurred in the home. Nothing that would warrant a haunting, but the new tenants who had been in there for just over 2 years, but things began to fall apart six months ago when their 8-year-old daughter began to have trouble sleeping.

She complained that there was something in her closet, shuffling around, making noises. Her parents had gone way out of their way to try and ease her fears, use logic on her, inspect the closet and even let her sleep in their room, but they realized they couldn't continue that forever.

They learned something about the land and that a prior home was on the lot somewhere, perhaps not precisely where the house sat now, but it had been the site of arson, being burned down by an enraged husband who came back from war and found his wife was cohabitating with someone else. They also found out the wife died later of smoke inhalation from the event, though she did not die on site.

This made the parents even more concerned that perhaps the house was haunted. Their daughter was beginning to talk of a ghost in the closet and the mother was getting spooked by the whole thing. They call you in to investigate.

Where do you begin and how to you deal with their daughter's fears?