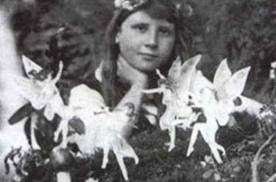 Sir Arthur Conan Doyle defended the authenticity of the 1917 fairies photo (above). He believed it to be genuine. Houdini vowed to get a message from the other side to his wife. After 10 years of trying to contact her husband during a séance every Halloween night (the anniversary of his death), she never got the coded message they had designed before he died.

Ectoplasm was touted by spiritualists and mediums to be the substance of which ghosts were made. During seances and in trances they would supposedly produce ectoplasm. This hoaxed material was often made from cheesecloth, egg whites, soap and gauze.

Other methods by which spiritualists hoaxed people were seances, ouija board sessions, automatic writing, table tilting and spirit photography. As you can imagine, nowadays we haven't gotten far from this practice of looking to these methods to prove communications with ghosts. You also might notice the correlations with extreme religions that also use practices such as hands on healing and dancing with snakes as other ways to snag gullible believers.

I have a million problems with spiritualism and ghost investigations being tied together and the majority have to do with belief. Spiritualism is no different than religion and one must believe without question anything fed to them by those considered to be leaders or specialists. So long as we refer to ghosts as spirits and look to spiritualists to be conduits for interactions, we are dealing with a belief system involving life and death and how the process works.

Decades from now we will laugh at the use of electrician's tools and IR cameras as ways to hunt ghosts and KII meters as conduits for conversation with the other side. Hell, I laugh at it now.

So, how do we get past the spiritual bend and the “tool-happy” methods to get to the heart of paranormal activity?

It will take a wide variety of specialties in the sciences and some meticulous documentation in a haunted site to really get a feeling for what elements are involved, what timing is involved, what might aggravate it and alleviate it and how humans manage to detect that which cameras and audio equipment cannot.

I'm thrilled we are not as ignorant as turn-of-the-century folks, but we still ooh and ahh over some of the ghost hunting tools used today that are absurdly ridiculous, like that EMF meter that captures so much random activity in unshielded environments that it is positively useless. People who don't understand the sciences can easily be hoodwinked by it. I'm just reminded of Steve and Brian trying to figure out how a Geiger counter works while on a ghost hunt.

It's not certain just what avenue ghost hunting will take next, but I'm in favor of controlled experiments and making equipment with the same parameters as human senses to capture what we see and hear. Sometimes, it's just the simplest of approaches that make the most sense.