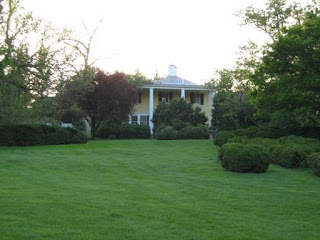 I did this in 2008 and forgot to do it in 2009. So, I'm remembering in 2010. I like to make a list of places I'd most like to do a hunt at. My tastes change over time, especially once the ghost hunting shows have picked over the usual culprits. I tend to not like to follow the crowd and go by my own motivations and not be outwardly directed. So, here's a list of places I most want to hunt at in order:

1. Aspen Grove. No duh. This is the scene of the crime, the place I grew up in, the one that started my whole venture into ghost hunting. This 250-year-old building was once a Civil War Hospital used by both sides at one time or other during The War. I don't just want to go back to figure out what happened there as a kid, but because since that time I moved away, my father, mother, sister, brother and dear family friend who lived at the end of our driveway all vowed to haunt it and have passed on. With them having known my desire to contact the other side, it's as close to a sure thing as possible. Really, I could just list this and stop at this point because this is what I really want.
2. The Newpoint-Comfort Lighthouse. This one is located on the Chesapeake Bay in a quiet little area few know about. We had a summer home there when I was growing up and I always wanted to go back and see if some of the strange things that occurred on that little stone island still go on there.
3. The cemetery in Newpoint-Comfort. In front of my childhood summer home, a beautiful Victorian style home, it faced a cemetery where as a kid I saw little blue balls of light dancing in and out, up and down and never could explain what the hell it was.
4. Sommerou (spelling?) It was my father's family home in Norway and it housed many of the Thorvaldsen clan and I suspect that it would have a strange effect on me or I would have a strange effect on it.
5. Bird Cage Theater, Tombstone, AZ. This is really in my own backyard and there's no reason I haven't been there other than I hear they charge a shitload to hunt there, but there's something about that town and that layout and that building that tells me it would be a really weird place to hunt.
6. Vulture Mines, AZ. Yet again, in my own backyard. I just hate when these places start charging for people to hunt and it makes me highly suspicious, but I am interesting in going to a mining area where death occurred. I have a strong belief that geology is important in places that become haunted and I would like to feel it myself and see just why.
7. Suicide Forest, Mt. Fuji, Japan. The geology, the forest, the suicides. I think it's got to be truly disturbing.
8. Shepherd Pratt. This was a fortress like old structure in Maryland where my sister was hospitalized during her troubled teens and the energy when I entered the place was like nowhere else I've ever been and I've been in prisons, other mental facilities and even worked in an ER, but never felt this before.
9. The haunted mining town in Chile where "Destination Truth" did the most eerie episode.
10. Romanian Forest. Another "Destination Truth" location that intrigued me and as a hunter and psychic, I would very much like to get into that circle and see what occurs.