How To Do a Ghost Study in a Cemetery 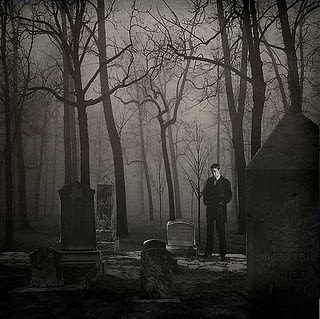 There’s a lot of ways to go about doing a study in a graveyard. Why even bother? That’s a good question. I admit to being chronically open-minded about testing anything and everything. I’m always “game” for whatever. Sometimes, it’s like word association. What you’re trying may not have any value or efficacy, but it may trigger another thought that puts you on the right path, so I treat ghost hunting as a series of serendipitous growth and expansion.

I have done studies in graveyards with some very exciting results. After much observation and interaction, I’ve come to the conclusion that recent grieving and visitations at the cemetery makes things more active. As well, the longer you’re there, the more it gets “used” to you. The more frequently you go there, the more reactive it becomes. It might simply be, if you are there—they will come.

The first declaimer has to be that you’re not supposed to be in cemeteries after dark. If you are, you better have some obvious good intentions. A rural cemetery is best for many reasons; it’s quieter, it’s darker, less likely to be harassed by police or citizens for being there and it doesn’t see as much human interaction which might be to your advantage.

I am always ready by arriving before it gets dark. You need to note the entire cemetery and take daylight shots from many angles. I can’t tell you how many times I’ve looked at a shot done in the dark and thought “wow, I got something!” and went back in the daylight to find out that it was a headstone or a metal sign marker I got in the shot.

Establish your alibi. Find a headstone and leave flowers there. Remember where it is and the name. You can always give the excuse that you were visiting the grave and it got dark and you realized it was time to go. With camera in hand, this sounds feasible. Good luck. People have been arrested for being there after dark.

This is a place that holds the remains of many people’s loved ones, treat it as if your own family were housed there. I must admit that the more respect and reverence you treat a cemetery with, the more pure your intentions, the more interaction you will get. I always bring a handful of flowers to leave them on the oldest most unattended graves, saying the occupant’s name because it has probably not been uttered for decades.

I have theories about it, but it seems to be true; pathways are most active in cemeteries, roads, lanes, paths. The simplest way to move about seems to have the most activity. My theories run the gamut from leylines to feng shui proving energy travels easier on a straight path, or if it’s residual trails of the living left behind by visitors that is somehow magnetically attractive to spirit activity, I don’t know. But, from much experience, I can tell you they seem to be active.

Newly visited graves have the best activity as do large groupings of one family put together. In one local cemetery here, I’ve documented for 7 years the continued activity in a family plot that holds about 19 family members. You’re going to want to go to the mossiest bad-ass scary looking headstone, but avoid that tendency. More visited areas of the cemetery have a lot more activity, as do benches. Yeah, benches. This is probably because they hold the people who grieve and whose emotions are at the surface. This seems to act like an attracting device for phenomenon.

If you’re lucky enough to find a quiet cemetery where you can do EVP, I suggest you give yourself a good 15-20 minutes before sunset to walk around, get used to the place, read some headstones, stop occasionally, move on. You will find yourself periodically going by one area over and over again with a sense of being watched from there. It will become your central point. Heed that sensation. It’s definitely telling you something. That is where you need to sit and do a study. Set up your recorder, hold your camera. You can try your hand at a pendulum or dowsing rods if you want. Graveyards are particularly good places for these devices. I personally prefer to be less hands on for this encounter. I will settle in a place and photograph and run my recorder while I carry on a conversation.

What do you talk to the dead about? A lot of people think you should be quizzing, “why are you here?” “what do you want?” “do you have a message?” I like to just shoot the breeze. My conversation might go like this. “This is a beautiful place. Your family must have loved your very much to have you placed here. I bet you like the trees the best. They make a wonderful sound when the wind blows, don’t they?” (pause for a time) “William Kimmer. Did they call you Bill, I wonder? I like Willy Kimmer. That sounds nice. You lived a long life William. You must have seen a lot in the 1920s and the depression, World War II, Vietnam. What an amazing time to be alive.” (pause for a time). So, the conversation goes on. For a time, I might talk about myself to give a reference for what kind of person I am.

My rule in EVP is always: Shoot the breeze, chit chat, laugh, reveal something about yourself that makes you vulnerable and human, never provoke, never grill with questions.

So far as taking pictures, I’ve found repeat phenomenon in some cemeteries, so if something comes up on the screen of your digital camera, take consecutive shots, take some more later on in the same spot. Have lots of comparisons to find out what might have caused it. At one particular cemetery, I have consecutive shots showing the phenomenon forming, peaking, and fading off.

Ideally, you want to go back there if you can. Cemeteries do seem to get used to people and if you found something there before, each time you come, the activity will start sooner and sooner. On average at a new cemetery if there is phenomenon to be found, it’ll take at least 30 minutes to happen, but with repeat visits, it can start the minute you climb out of the car. It almost feels like a schoolyard of children rushing to greet a favorite teacher.

I can’t tell you if I think the spirits of loved ones visit their family at cemeteries. Were such a thing possible, that is one place they would go, where the relative is forced to sit with the hard cold headstone and recall all the grief. My logic tells me that no one died in the cemetery and no one’s spirit, should such a thing be possible, left their body at the cemetery, but the phenomenon we record could very well be of an emotional imprint such as found on battlefields, a place where a great deal of agony existed and perhaps still leaves a residual. Either way, cemeteries can have activity and so I don’t think studying them is a wasted bit of time and the beauty of walking in a silent graveyard is spiritually uplifting. Instead of thinking of death, I think of the lives of the people and the impact they left behind by the grieving of their loved ones.