The Ghosts and Flashlight Tag 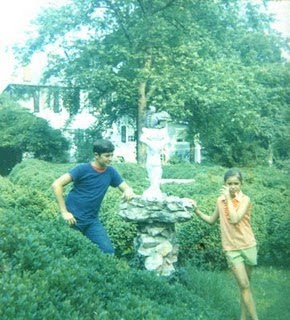 Imagine living on an estate with two enormous boxwood mazes. Then, imagine having five kids in the family and parents who, no matter how well they were doing financially, didn’t buy their kids toys. They wanted them to be creative and resourceful. The land and its outbuildings alone had more than enough to work with, from building tree forts to using leftover furniture in the barn to turn it into a playhouse. One of our favorite activities was flashlight tag. It was especially fun on a hot Virginia summer’s night with lightning bugs competing for attention.

The back boxwood maze was more mature in height and an ideal place for a great game of flashlight tag. The ancient birdbath with the naked cherub statue in the center was our starting point. Usually my brother wanted to manage (or is that micromanage?) the game, so he would begin by being “it.” The rest of us would scatter like buckshot throughout the winding maze of English boxwoods to find the perfect strategic point to make our way towards the birdbath without being seen.

This night, however, the boxwoods were a wet mess and I opted to go hide in the hickory tree grove nearby. Between the maze and the hickory trees was a huge rectangle of about a half an acre or an acre of land that we used as the family football field on Sunday afternoons. Darting from tree to tree in the perfectly straight stand, I giggled as I saw the light click on and off and my sisters yelling at my brother and instigating his assault on them in the darkness.

Besides the buzz of mosquitoes, the hickory stand was pretty lonely and extremely dark. It lined up against the woods of an estate beside ours called “Tallwood” owned by George Mason University and left unruly and natural. The land there always bothered me and, in fact, I usually avoided the hickory stand all together because it felt like someone was at my back the whole time.

This night would prove why I instinctively avoided the grove.

The lightning bugs around me were intense since I was bottled in between the trees and the fence line where the raspberry bushes grew. Their sluggish light soothed me and made me feel sort of trance-like. I leaned against the tree, knowing I should make my run for the birdbath, but hoping he’d take out my sisters first. I had a tendency to end up in the crosshairs. Not this time. I was determined to win again.

Hushed voices sounded a few trees up from me. I leaned back and studied the line of gray tree trunks. Nothing. I looked over to the boxwood maze, the light blinking on and off. My sisters together darted through what I called “the great hall” because it was the biggest empty “room” in the maze.

Murmuring voices continued to talk. I stormed up the tree line, studying it carefully. It wasn’t unusual for local kids from the surrounding suburbs to try and sneak into the yard and play. I usually didn’t mind. It got lonely there when my siblings usually avoided me. They let me play the game along with them mostly because as the baby of the family I’d stomp and cry and get attention, so I found myself playing alone a lot. There were, however, a few unsavory neighborhood kids I didn’t want to enjoy my personal haven, so I came to a stop between the trees and waited. Scott got my sister, Kathy out and she took over the flashlight. Scott took the game like a tactile engineer so my chances of winning were looking pretty miserable. In my mind, I begged out of the game, more interested in who was in my yard.

The voices sounded again. This time they were where I had originally been standing. I rushed over fast and came to a halt. There was no one there. They sounded again like quick hushed whispers behind the berry vines. I turned and studied the darkness, unable to see anything but the pulsing of the lightning bugs.

A sense of movement behind me made me turn and study the long line of trees. I peered out from behind one, almost afraid at this point. I’d heard these hushed whispers in our house, but never on the property. A dark shadow stepped out from behind a tree about five trees up from me. Just the long length of half a body coming out from behind the tree and then—whoosh! It was gone.

Still imaging Kurt or one of the other pranksters in the neighborhood, I stomped over to the tree and looked. No one. Of course. I rolled my eyes and leaned back against the tree waiting for Scott to hopefully become “it” again so I could maybe rejoin the game. I looked down the row of trees and watched as something tall and dark stepped out from behind the tree and started a slow cruise along the tree line away from me.

Kathy? Tina? Could it be one of my sisters? No, probably Scott!

I ran towards it, feeling myself gain on it when it just vanished. It didn’t step behind anything. It didn’t run. It just suddenly wasn’t there. Winded and confused, I looked up at the cloudy sky. No moonlight. I waved my arms. No shadow. The murmuring voices started again in the raspberry bushes not far from me.

I didn’t even look this time. My mind immediately focused on reports that college people made when they rented our cottages on the property. Shadowy figures peering into windows, taking off through fields, riding horses, disappearing without notice, and murmuring voices.

As I high-tailed it towards the house, the flashlight’s beam hit me and I stopped.

She looked there too.

“We don’t play outside of the boxwoods. You disqualified yourself, She-She.”

“I don’t go there at night.” She told me in a hushed voice.

“That’s where he walks.”

“Don’t know.” She shrugged. “I think he’s having a meeting with someone. Did you see him?”

To Tina, none of this was unusual. She took it as part of nature. No threat to herself.

“I think he’d rather be alone, so I just give him a wide berth.” She sighed. “Take off now, I’ll tell them you were sick. I know how you hate for Scott to beat you.” She ruffled my tangled hair and I rushed off towards the relative safety of the house.

The spirits in the main house I could take.